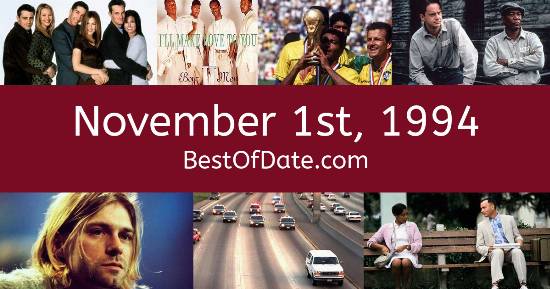 Songs that were on top of the music singles charts in the USA and the United Kingdom on November 1st, 1994.

The movie "Pulp Fiction" was at the top of the box office on November 1st, 1994.

The date is November 1st, 1994 and it's a Tuesday. Anyone born today will have the star sign Scorpio. Halloween has just come and passed.

Bill Clinton is currently the President of the United States and the movie Pulp Fiction is at the top of the Box Office. In the United Kingdom, John Major is the current Prime Minister. Meanwhile, in technology news, a relatively new storage format called the CD is beginning to outpace the regular cassette tape in music sales. The disc-based format gives listeners the ability to skip between songs instead of having to manually rewind and forward.

It's 1994, so radio stations are being dominated by the likes of All-4-One, Boyz II Men, R. Kelly, Céline Dion, Bruce Springsteen, Bryan Adams, Meat Loaf, Bon Jovi, Wet Wet Wet, Rednex and Mariah Carey. In Europe, a war is continuing to rage on in Bosnia and Herzegovina. On television, a new animated series called "Gargoyles" has been broadcasted for the first time.

Meanwhile, a new sci-fi film called "Stargate" has been released in movie theaters. A man called Francisco Martin Duran has been arrested after he fired 29 rounds from an SKS rifle at the White House. Duran had approached the gates of the White House in a trench coat before opening fire. On Nickelodeon, a new cartoon called "Aaahh!!! Real Monsters" has recently been aired for the first time.

If you were to travel back to this day, notable figures such as Eazy E, Selena, Bob Ross and Jerry Garcia would all be still alive. On TV, people are watching popular shows such as "One Foot in the Grave", "Beavis and Butt-Head", "Ellen" and "Touched by an Angel". Meanwhile, gamers are playing titles such as "Mortal Kombat", "X-Men", "NBA Jam" and "Jungle Strike".

Children and teenagers are currently watching television shows such as "Barney & Friends", "Hangin' with Mr. Cooper", "The Nanny" and "Gargoyles". Popular toys at the moment include the likes of Cabbage Patch Kids, G.I. Joe (figures), Nerf Blaster and Action Man.

If you are looking for some childhood nostalgia, then check out November 1st, 2000 instead.

Rapper. Deceased
Born on November 1st, 1996
He was born exactly 2 years after this date.

Bill Clinton was the President of the United States on November 1st, 1994.

John Major was the Prime Minister of the United Kingdom on November 1st, 1994.

Have something to say about November 1st, 1994?

Enter your date of birth below to find out how old you were on November 1st, 1994.

Here are some fun statistics about November 1st, 1994.