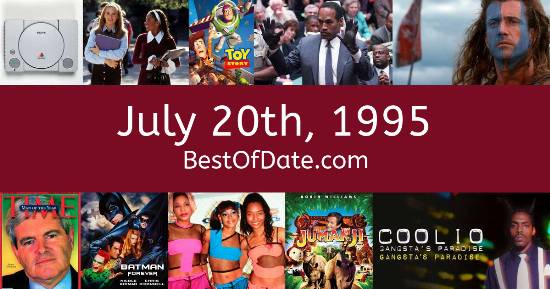 Songs that were on top of the music singles charts in the USA and the United Kingdom on July 20th, 1995.

The date is July 20th, 1995 and it's a Thursday. Anyone born today will have the star sign Cancer. It's summer, so the temperatures are warmer and the evenings are longer than usual.

In America, the song Waterfalls by TLC is on top of the singles charts. Over in the UK, Boom Boom Boom by Outhere Brothers is the number one hit song. Bill Clinton is currently the President of the United States and the movie Pocahontas is at the top of the Box Office.

It's 1995, so radio stations are being dominated by the likes of Celine Dion, Everything but the Girl, Coolio, Oasis, Michael Jackson, Boyzone, Madonna, Montell Jordan, TLC and Mariah Carey. Former football player O.J. Simpson is currently being tried for the murder of his ex wife and her friend. Singer Robbie Williams has just shocked the world by announcing that he is leaving the group Take That.

If you were to travel back to this day, notable figures such as Jerry Garcia, Mickey Mantle, Yitzhak Rabin and Stretch would all be still alive. On TV, people are watching popular shows such as "Murder, She Wrote", "Friends", "Gargoyles" and "Hercules: The Legendary Journeys". Meanwhile, gamers are playing titles such as "Earthworm Jim", "Mortal Kombat 3", "Full Throttle" and "Air Combat".

Children and teenagers are currently watching television shows such as "Teenage Mutant Ninja Turtles", "The Animals of Farthing Wood", "The Magic School Bus" and "Aaahh!!! Real Monsters". If you're a kid or a teenager, then you're probably playing with toys such as Jenga, Super Soaker (water gun), Pogs and Littlest Pet Shop.

If you are looking for some childhood nostalgia, then check out July 20th, 2001 instead.

Rapper. Deceased
Born on July 20th, 1999
He was born exactly 4 years after this date.

Bill Clinton was the President of the United States on July 20th, 1995.

John Major was the Prime Minister of the United Kingdom on July 20th, 1995.