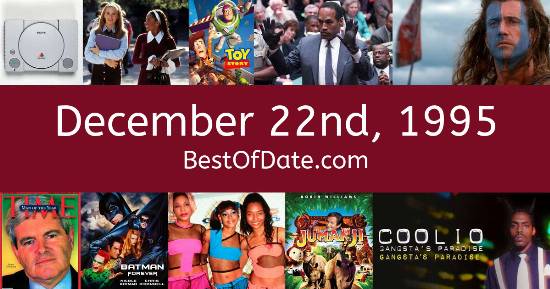 These songs were on top of the music charts in the United States and the United Kingdom on December 22nd, 1995.

The top "Box Office" movie on this date was the film "Waiting to Exhale".

The date is December 22nd, 1995, and it's a Friday. Anyone born today will have the star sign Capricorn. Currently, people have "that Friday feeling" and are looking forward to the weekend.

Christmas Day of 1995 is fast approaching and the excitement is building. Department stores are thronged with Christmas shoppers. In America, the song One Sweet Day by Mariah Carey & Boyz II Men is on top of the singles charts. Over in the UK, Earth Song by Michael Jackson is the number one hit song.

Bill Clinton is currently the President of the United States, and the movie Waiting to Exhale is at the top of the Box Office. In the United Kingdom, John Major is the current Prime Minister. A new form of communication called "text messaging" is continuing to grow in popularity. However, it can only be done if both the sender and the receiver are on the same cell network.

It's 1995, so radio stations are being dominated by the likes of Celine Dion, Everything but the Girl, Coolio, Oasis, Michael Jackson, Boyzone, Madonna, Montell Jordan, TLC and Mariah Carey. In Europe, the war in Bosnia and Herzegovina has recently come to an end following the intervention of NATO. If you were to travel back to this day, notable figures such as Dean Martin, Agnieszka Kotlarska, Tupac Shakur and Yaki Kadafi would all be still alive.

On TV, people are watching popular shows such as "Last of the Summer Wine", "Step by Step", "Beavis and Butt-Head" and "ER". Meanwhile, gamers are playing titles such as "Mortal Kombat II", "The Jungle Book", "Killer Instinct" and "Twisted Metal". Children and teenagers are currently watching television shows such as "Dink, the Little Dinosaur", "Art Attack", "Boy Meets World" and "Gargoyles".

Popular toys at the moment include the likes of Pogs / Milkcaps, Mighty Max, Dear Diary and the Sega Saturn.

These are trending news stories and fads that were prevalent at this time. These are topics that would have been in the media on December 22nd, 1995.

Check out our personality summary for people who were born on December 22nd, 1995.

Television shows that people were watching in December, 1995.

Popular video games that people were playing in December of 1995.

If you are looking for some childhood nostalgia, then you should check out December 22nd, 2001 instead.

Bill Clinton was the President of the United States on December 22nd, 1995.

John Major was the Prime Minister of the United Kingdom on December 22nd, 1995.

Enter your date of birth below to find out how old you were on December 22nd, 1995.
This information is not transmitted to our server.

Here are some fun statistics about December 22nd, 1995.