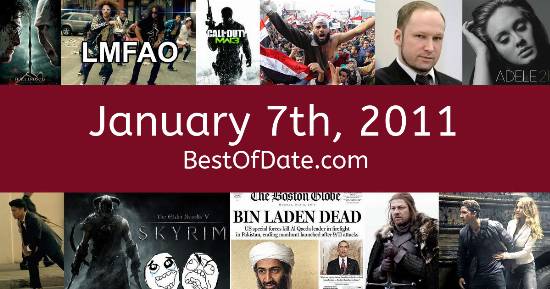 These songs were on top of the music charts in the United States and the United Kingdom on January 7th, 2011.

The date is January 7th, 2011, and it's a Friday. Anyone born today will have the star sign Capricorn. Currently, people have "that Friday feeling" and are looking forward to the weekend.

People are starting to return back to work and school after the Christmas holidays. In America, the song Firework by Katy Perry is on top of the singles charts. Over in the UK, When We Collide by Matt Cardle is the number one hit song.

Barack Obama is currently the President of the United States, and the movie True Grit is at the top of the Box Office. In the United Kingdom, David Cameron is the current Prime Minister. The term "hipster" is currently growing in use. The word is being used to describe people who are pretentious and deliberately anti-mainstream.

A Youtube video of a homeless man called Ted Williams is going viral after he shows off his radio voice skills. The success of the video has led to Williams receiving various job offers. If you were to travel back to this day, notable figures such as Nate Dogg, Elizabeth Taylor, Randy Savage and Ryan Dunn would all be still alive. On TV, people are watching popular shows such as "Two and a Half Men", "Desperate Housewives", "RuPaul's Drag Race" and "Modern Family".

Meanwhile, gamers are playing titles such as "Mass Effect 2", "Battlefield: Bad Company 2", "StarCraft II: Wings of Liberty" and "Fallout: New Vegas". Children and teenagers are currently watching television shows such as "Johnny Test", "Glee", "Big Time Rush" and "Good Luck Charlie". If you're a kid or a teenager, then you're probably playing with toys such as the Xbox 360, the KidiZoom Camera, ZhuZhu Pets and the iPad.

These are trending news stories and fads that were prevalent at this time. These are topics that would have been in the media on January 7th, 2011.

News stories and other events that happened around January 7th, 2011.

Check out our personality summary for people who were born on January 7th, 2011.

If you are looking for some childhood nostalgia, then you should check out January 7th, 2017 instead.

Barack Obama was the President of the United States on January 7th, 2011.

David Cameron was the Prime Minister of the United Kingdom on January 7th, 2011.

Find out what your age was on January 7th, 2011, by entering your DOB below.
This information is not saved on our server.

Here are some fun statistics about January 7th, 2011.