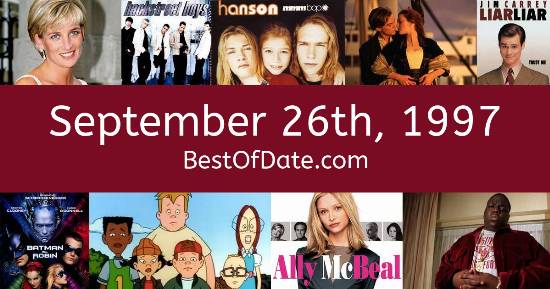 Songs that were on top of the music singles charts in the USA and the United Kingdom on September 26th, 1997.

The movie "The Peacemaker" was at the top of the box office on September 26th, 1997.

The date is September 26th, 1997 and it's a Friday. Anyone born today will have the star sign Libra. Currently, people have "that Friday feeling" and are looking forward to the weekend.

Schools have started back and autumn has arrived, so temperatures have started to cool and trees are beginning to shed their leaves. The earthy smells of fall have started to fill the air. In America, the song Honey by Mariah Carey is on top of the singles charts.

Over in the UK, Candle In The Wind 1997 by Elton John is the number one hit song. Bill Clinton is currently the President of the United States and the movie The Peacemaker is at the top of the Box Office. In the United Kingdom, Tony Blair is the current Prime Minister.

On TV, people are watching popular shows such as "Home Improvement", "Boy Meets World", "Hercules: The Legendary Journeys" and "3rd Rock from the Sun". Meanwhile, gamers are playing titles such as "Fade to Black", "Command & Conquer: Red Alert", "Blood Omen: Legacy of Kain" and "Castlevania: Symphony of the Night". Children and teenagers are currently watching television shows such as "All That", "Friends", "In the House" and "7th Heaven".

If you're a kid or a teenager, then you're probably playing with toys such as Littlest Pet Shop, the PlayStation (PS1), the Tamagotchi and Bop It.

If you are looking for some childhood nostalgia, then check out September 26th, 2003 instead.

Bill Clinton was the President of the United States on September 26th, 1997.

Tony Blair was the Prime Minister of the United Kingdom on September 26th, 1997.

Enter your date of birth below to find out how old you were on September 26th, 1997.

Here are some fun statistics about September 26th, 1997.