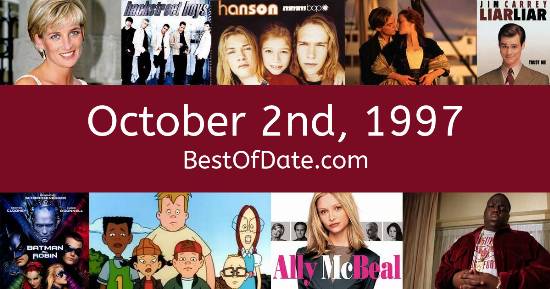 Songs that were on top of the music singles charts in the USA and the United Kingdom on October 2nd, 1997.

The movie "The Peacemaker" was at the top of the Box Office on October 2nd, 1997.

The date is October 2nd, 1997, and it's a Thursday. Anyone born today will have the star sign Libra. The summer is long gone. Temperatures have started to become much cooler and the evenings are beginning to get darker.

Fallen leaves have carpeted driveways, lawns, pathways and sidewalks and there's a fresh earthy scent in the ear. In America, the song Four Seasons Of Loneliness by Boyz II Men is on top of the singles charts. Over in the UK, Candle In The Wind 1997 by Elton John is the number one hit song.

Bill Clinton is currently the President of the United States, and the movie The Peacemaker is at the top of the Box Office. In the United Kingdom, Tony Blair is the current Prime Minister. A new form of communication called "text messaging" is continuing to grow in popularity. However, it can only be done if both the sender and the receiver are on the same cell network.

It's 1997, so radio stations are being dominated by the likes of Toni Braxton, the Spice Girls, Puff Daddy, No Doubt, Hanson and Elton John. If you were to travel back to this day, notable figures such as John Denver, Chris Farley, Sonny Bono and Rob Pilatus would all be still alive. On TV, people are watching popular shows such as "Step by Step", "The Nanny", "Xena: Warrior Princess" and "King of the Hill".

Meanwhile, gamers are playing titles such as "Blood Omen: Legacy of Kain", "Diablo", "Star Fox 64" and "Fallout". Kids and teenagers are watching TV shows such as "All That", "Hang Time", "KaBlam!" and "Smart Guy". If you're a kid or a teenager, then you're probably playing with toys such as G.I. Joe (figures), Fisher-Price Great Adventures Castle, Styrofoam plane gliders and the Sega Saturn.

These are trending news stories and fads that were prevalent at this time. These are topics that would have been in the media on October 2nd, 1997.

Check out our personality summary for people who were born on October 2nd, 1997.

If you are looking for some childhood nostalgia, then you should check out October 2nd, 2003 instead.

Bill Clinton was the President of the United States on October 2nd, 1997.

Tony Blair was the Prime Minister of the United Kingdom on October 2nd, 1997.

Enter your date of birth below to find out how old you were on October 2nd, 1997.
This information is not transmitted to our server.

Here are some fun statistics about October 2nd, 1997.