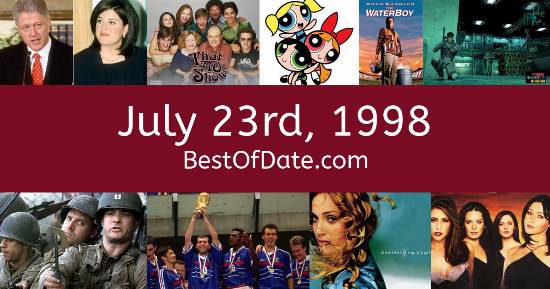 July 23rd, 1998 relates to an event in a movie, book, game or television series:

Songs that were on top of the music singles charts in the USA and the United Kingdom on July 23rd, 1998:

The date is July 23rd, 1998 and it's a Thursday. Anyone born today will have the star sign Leo. It's summer, so the temperatures are warmer and the evenings are longer than usual.

The Clinton-Lewinsky sex scandal is receiving ongoing media attention. On TV, people are watching popular shows such as "Home Improvement", "Party of Five", "Everybody Loves Raymond" and "Clueless". Meanwhile, gamers are playing titles such as "Fallout", "1080° Snowboarding", "World Cup 98" and "StarCraft".

Kids and teenagers are watching TV shows such as "Pinky and the Brain", "Goosebumps", "Moesha" and "Daria". Popular toys include the likes of "PlayStation (PS1)", "Tamagotchi", "Nintendo 64" and "Bop It".

Celebrities, historical figures and noteable people who were born on the 23rd of July:

National holidays and famous events that fall on the 23rd of July:

Who was the Prime Minister of the United Kingdom on July 23rd, 1998?

Looking for some nostalgia? Here are some Youtube videos relating to July 23rd, 1998. Please note that videos are automatically selected by Youtube and that results may vary! Click on the "Load Next Video" button to view the next video in the search playlist. In many cases, you'll find episodes of old TV shows, documentaries, music videos and soap dramas.