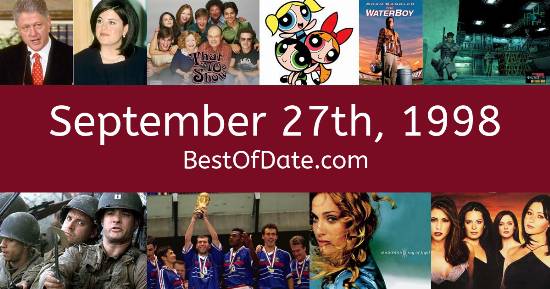 September 27th, 1998 relates to a fictional event in a movie, book, game or television series.

Songs that were on top of the music singles charts in the USA and the United Kingdom on September 27th, 1998.

The date is September 27th, 1998 and it's a Sunday. Anyone born today will have the star sign Libra. Currently, people are enjoying their weekend.

Schools have started back and autumn has arrived, so temperatures have started to cool and trees are beginning to shed their leaves. The earthy smells of fall have started to fill the air. In America, the song I Don't Want To Miss A Thing by Aerosmith is on top of the singles charts.

Over in the UK, I Want You Back by Melanie B is the number one hit song. Bill Clinton is currently the President of the United States and the movie Rush Hour is at the top of the Box Office. In the United Kingdom, Tony Blair is the current Prime Minister.

Popular toys at the moment include the likes of Sylvanian Families, Yo-yo, Super Soaker (water gun) and the Tamagotchi.

Bill Clinton was the President of the United States on September 27th, 1998.

Tony Blair was the Prime Minister of the United Kingdom on September 27th, 1998.

Enter your date of birth below to find out how old you were on September 27th, 1998.

Here are some fun statistics about September 27th, 1998.

Leave a comment and tell everyone why September 27th, 1998 is important to you.