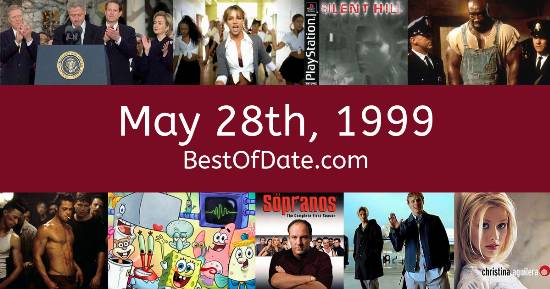 On May 28th, 1999, the following songs were at the top of the music charts in the USA and the UK.

The top "Box Office" movie on this date was the film "The Mummy".

The date is May 28th, 1999, and it's a Friday. Anyone born today will have the star sign Gemini. Currently, people have "that Friday feeling" and are looking forward to the weekend.

The summer of 1999 has finally arrived. The weather has warmed up and the evenings are brighter than usual. In America, the song Livin' La Vida Loca by Ricky Martin is on top of the singles charts. Over in the UK, You Needed Me by Boyzone is the number one hit song.

Bill Clinton is currently the President of the United States, and the movie The Mummy is at the top of the Box Office. In the United Kingdom, Tony Blair is the current Prime Minister. Meanwhile, CDs have become the dominant format for music. People are buying CD players and portable CD players such as the "Discman". As a result, the older cassette tape format is continuing to decline in sales.

The Nokia 3210 is currently one of the most popular cell phones on the market. If you were to travel back to this day, notable figures such as John F. Kennedy Jr., Walter Payton, Big Pun and Tom Landry would all be still alive. On TV, people are watching popular shows such as "Touched by an Angel", "Buffy the Vampire Slayer", "Celebrity Deathmatch" and "Charmed".

Meanwhile, gamers are playing titles such as "Soulcalibur", "Tom Clancy's Rainbow Six", "Oddworld: Abe's Exoddus" and "The Legend of Zelda: Ocarina of Time". Kids and teenagers are watching TV shows such as "Beverly Hills, 90210", "The Nanny", "Johnny Bravo" and "USA High". If you're a kid or a teenager, then you're probably playing with toys such as Yo-yo, Littlest Pet Shop, Fisher-Price Great Adventures Castle and Spice Girls dolls.

These are trending news stories and fads that were prevalent at this time. These are topics that would have been in the media on May 28th, 1999.

Check out our personality summary for people who were born on May 28th, 1999.

If you are looking for some childhood nostalgia, then you should check out May 28th, 2005 instead.

Soccer player.
Born on May 28th, 2000
He was born exactly one year after this date.

Historical weather information for May 28th, 1999.

Bill Clinton was the President of the United States on May 28th, 1999.

Tony Blair was the Prime Minister of the United Kingdom on May 28th, 1999.

Enter your date of birth below to find out how old you were on May 28th, 1999.
This information is not transmitted to our server.