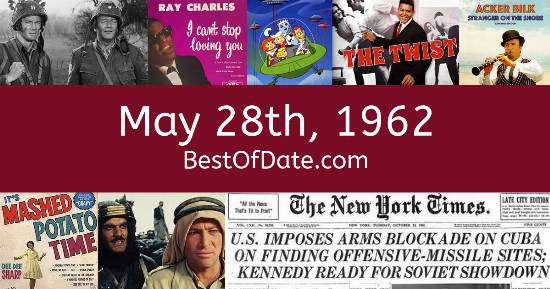 On May 28th, 1962, the following songs were at the top of the music charts in the USA and the UK.

The TV shows take me back to a much happier time when kids could be kids and adults responsible.
Posted on November 21st, 2022 22:57

Seeing What's My Line? on here gives me memories of a deceased family friend who was on the show a few or so years after the date and it was quite a nice birthday present for them when I gave them a videotape of the rerun of their appearance from a game show channel in the late 90s/early 00s.
Posted on November 23rd, 2022 02:31

The date is May 28th, 1962, and it's a Monday. Anyone born today will have the star sign Gemini. The summer of 1962 has finally arrived. The weather has warmed up and the evenings are brighter than usual.

In America, the song I Can't Stop Loving You by Ray Charles is on top of the singles charts. Over in the UK, Good Luck Charm by Elvis Presley is the number one hit song. John Fitzgerald Kennedy is currently the President of the United States, and the movie West Side Story is at the top of the Box Office.

If you were to travel back to this day, notable figures such as Marilyn Monroe, Robert Frost, Ernie Davis and John F. Kennedy would all be still alive. On TV, people are watching popular shows such as "The Ed Sullivan Show", "What's My Line?", "Gunsmoke" and "Route 66". Kids and teenagers are watching TV shows such as "The Many Loves of Dobie Gillis", "Courageous Cat and Minute Mouse", "The Dick Tracy Show" and "Davey and Goliath".

If you're a kid or a teenager, then you're probably playing with toys such as Wooly Willy, Fisher Price Little People, Barbie and Etch A Sketch.

These are trending news stories and fads that were prevalent at this time. These are topics that would have been in the media on May 28th, 1962.

Check out our personality summary for people who were born on May 28th, 1962.

Television shows that people were watching in May, 1962.

If you are looking for some childhood nostalgia, then you should check out May 28th, 1968 instead.

Australian singer.
Born on May 28th, 1968
She was born exactly 6 years after this date.

Canadian politician. Deceased
Born on May 28th, 1969
He was born exactly 7 years after this date.

National holidays and famous events that fall on the 28th of May.

John Fitzgerald Kennedy was the President of the United States on May 28th, 1962.

Enter your date of birth below to find out how old you were on May 28th, 1962.
This information is not transmitted to our server.