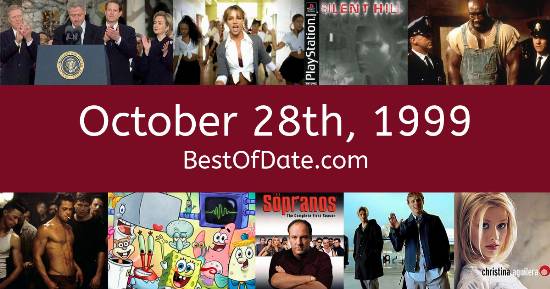 October 28th, 1999 relates to an event in a movie, book, game or television series:

Songs that were on top of the music singles charts in the USA and the United Kingdom on October 28th, 1999:

The date is October 28th, 1999 and it's a Thursday. Anyone born today will have the star sign Scorpio. The summer is long gone. Temperatures have started to become much cooler and the evenings are beginning to get darker.

Fallen leaves have carpeted driveways, lawns, pathways and sidewalks and there's a fresh earthy scent in the ear. Halloween of 1999 is just days away. People are watching horror movies and thinking about which costume they are going to wear. Others are organizing parties. In America, the song Smooth by Santana & Rob Thomas is on top of the singles charts.

Over in the UK, Genie In A Bottle by Christina Aguilera is the number one hit song. Bill Clinton is currently the President of the United States and the movie Best Man is at the top of the Box Office. In the United Kingdom, Tony Blair is the current Prime Minister.

Pokemon has become one of the most popular franchises in the world, as trading cards, toys and handheld games gross over one billion dollars. In baseball, the New York Yankees have just won the 1999 World Series after defeating the Atlanta Braves 4-0. This is the second year in a row that the Yankees have swept the series. People are watching popular TV shows such as "Touched by an Angel", "3rd Rock from the Sun", "7th Heaven" and "CatDog".

Meanwhile, gamers are playing titles such as "Pokémon Red and Blue", "Silent Hill", "Counter-Strike" and "Resident Evil 3: Nemesis". Children and teenagers are currently watching television shows such as "Tales from the Cryptkeeper", "Blue's Clues", "Recess" and "Rocket Power". Popular toys include the likes of "Yo-yo", "Littlest Pet Shop", "Nintendo 64" and "The Pokémon Trading Card Game".

Celebrities, historical figures and noteable people that were born on the 28th of October:

Who was the Prime Minister of the United Kingdom on October 28th, 1999?

Enter your date of birth below to find out how old you were on October 28th, 1999.

Looking for some nostalgia? Here are some Youtube videos relating to October 28th, 1999. Please note that videos are automatically selected by Youtube and that results may vary! Click on the "Load Next Video" button to view the next video in the search playlist. In many cases, you'll find episodes of old TV shows, documentaries, music videos and soap dramas.

Here are some fun statistics about October 28th, 1999.