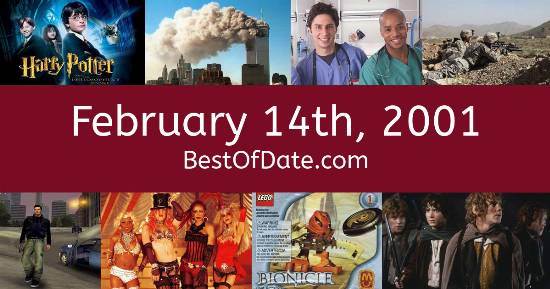 Songs that were on top of the music singles charts in the USA and the United Kingdom on February 14th, 2001.

The movie "Wedding Planner" was at the top of the box office on February 14th, 2001.

The date is February 14th, 2001 and it's a Wednesday. Anyone born today will have the star sign Aquarius. It's Valentine's Day, so couples are exchanging cards and going out to dinner together.

In America, the song Ms. Jackson by Outkast is on top of the singles charts. Over in the UK, Whole Again by Atomic Kitten is the number one hit song. George W. Bush Jnr. is currently the President of the United States and the movie Wedding Planner is at the top of the Box Office.

If you were to travel back to this day, notable figures such as Dale Earnhardt, Joey Ramone, Aaliyah and Thuy Trang would all be still alive. On TV, people are watching popular shows such as "Walker, Texas Ranger", "Oz", "Charmed" and "Andromeda". Meanwhile, gamers are playing titles such as "Tony Hawk's Pro Skater 2", "TimeSplitters", "Banjo-Tooie" and "WWF SmackDown! 2: Know Your Role".

Children and teenagers are currently watching television shows such as "Pokemon", "That '70s Show", "Batman Beyond" and "Roswell". Popular toys at the moment include the likes of Groovy Girls, Betty Spaghetty (doll), Finger skateboards and Tekno the Robotic Puppy.

If you are looking for some childhood nostalgia, then check out February 14th, 2007 instead.

George W. Bush Jnr. was the President of the United States on February 14th, 2001.

Tony Blair was the Prime Minister of the United Kingdom on February 14th, 2001.

Enter your date of birth below to find out how old you were on February 14th, 2001.

Here are some fun statistics about February 14th, 2001.