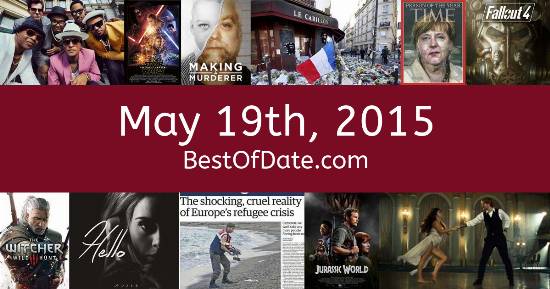 Songs that were on top of the music singles charts in the USA and the United Kingdom on May 19th, 2015:

The date is May 19th, 2015 and it's a Tuesday. Anyone born today will have the star sign Taurus. The summer of 2015 has finally arrived. The weather has warmed up and the evenings are brighter than usual.

In America, the song See You Again by Wiz Khalifa featuring Charlie Puth is on top of the singles charts. Over in the UK, Cheerleader by OMI is the number one hit song. Barack Obama is currently the President of the United States and the movie Pitch Perfect 2 is at the top of the Box Office.

In Ireland, a referendum campaign is in full swing as people prepare to vote on whether to legalize same-sex marriage or not. Nick Fradiani has just won the 14th season of American Idol and a new VoIP application called "Discord" has recently been released. The world of music is in mourning following the passing of blues singer B.B. King.

In soccer, Liverpool legend Steven Gerrard has just played his final game for the club. The eight season of The Voice has come to an end, with Sawyer Fredericks being crowned as the winner. On TV, people are watching popular shows such as "Bones", "Modern Family", "The Walking Dead" and "Orange Is the New Black".

Meanwhile, gamers are playing titles such as "Alien: Isolation", "Assassin's Creed: Unity", "Far Cry 4" and "The Witcher 3: Wild Hunt". Kids and teenagers are watching TV shows such as "Jake and the Never Land Pirates", "Austin & Ally", "Every Witch Way" and "Henry Danger". Popular toys include the likes of "PlayStation 4" and "Xbox One".

Notable events that occurred around May 19th, 2015:

Who was the Prime Minister of the United Kingdom on May 19th, 2015?

Looking for some nostalgia? Here are some Youtube videos relating to May 19th, 2015. Please note that videos are automatically selected by Youtube and that results may vary! Click on the "Load Next Video" button to view the next video in the search playlist. In many cases, you'll find episodes of old TV shows, documentaries, music videos and soap dramas.