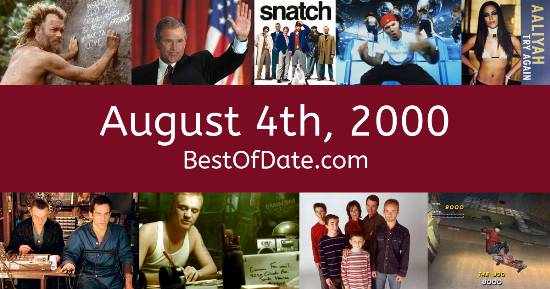 Songs that were on top of the music singles charts in the USA and the United Kingdom on August 4th, 2000.

The date is August 4th, 2000 and it's a Friday. Anyone born today will have the star sign Leo. Currently, people have "that Friday feeling" and are looking forward to the weekend.

It's summer, so the temperatures are warmer and the evenings are longer than usual. In America, the song It's Gonna Be Me by 'N Sync is on top of the singles charts. Over in the UK, We Will Rock You by Five & Queen is the number one hit song.

Bill Clinton is currently the President of the United States and the movie The Klumps is at the top of the Box Office. In the United Kingdom, Tony Blair is the current Prime Minister. A relatively new form of communication called "text messaging" is continuing to explode in popularity. Although the technology has been around since the mid-1990s, it was only recently that cell providers started to allow users to send SMS messages to people on different networks.

Brad Pitt and Jennifer Aniston have just been married in a lavish Malibu wedding. If you were to travel back to this day, notable figures such as Yokozuna, Dale Earnhardt, Joey Ramone and Aaliyah would all be still alive. On TV, people are watching popular shows such as "The X-Files", "Sabrina, the Teenage Witch", "Charmed" and "Futurama".

If you are looking for some childhood nostalgia, then check out August 4th, 2006 instead.

Celebrities, historical figures and other notable people who were born on August 4th.

Musician. Deceased
Born on August 4th, 1901
He was not alive on this date.

Bill Clinton was the President of the United States on August 4th, 2000.

Tony Blair was the Prime Minister of the United Kingdom on August 4th, 2000.

Enter your date of birth below to find out how old you were on August 4th, 2000.

Here are some fun statistics about August 4th, 2000.