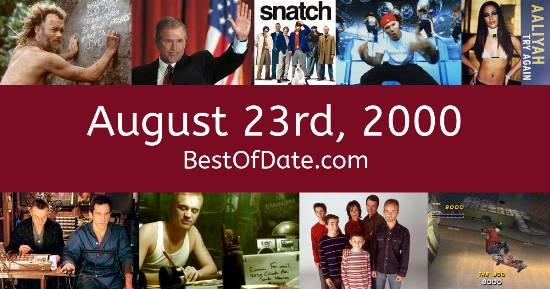 August 23rd, 2000 relates to a fictional event in a movie, book, game or television series.

On August 23rd, 2000, the following songs were at the top of the music charts in the USA and the UK.

The top "Box Office" movie on this date was the film "The Cell".

The date is August 23rd, 2000, and it's a Wednesday. Anyone born today will have the star sign Virgo. The summer of 2000 is coming to an end and fall is just around the corner.

In America, the song Incomplete by Sisqo is on top of the singles charts. Over in the UK, I Turn To You by Melanie C is the number one hit song. Bill Clinton is currently the President of the United States, and the movie The Cell is at the top of the Box Office.

In technology news, more and more music companies are beginning to release MP3 players. The new MP3 format means that music listeners are able to listen to multiple albums on the go. It's the year 2000, so the music charts are being dominated by the likes of Christina Aguilera, Faith Hill, Savage Garden, Destiny's Child, Santana, Sisqó, Creed, Aaliyah and Enrique Iglesias. If you were to travel back to this day, notable figures such as Yokozuna, Dale Earnhardt, Joey Ramone and Aaliyah would all be still alive.

On TV, people are watching popular shows such as "Walker, Texas Ranger", "Everybody Loves Raymond", "Celebrity Deathmatch" and "Roswell". Meanwhile, gamers are playing titles such as "Pokémon Red and Blue", "Crazy Taxi", "Resident Evil - Code: Veronica" and "Diablo II". Children and teenagers are currently watching television shows such as "The Simpsons", "Rugrats", "Friends" and "Sabrina the Teenage Witch".

Popular toys at the moment include the likes of the PlayStation (PS1), Gogo's Crazy Bones, Poo-Chi (robot dog) and Razor (scooter).

These are trending news stories and fads that were prevalent at this time. These are topics that would have been in the media on August 23rd, 2000.

News stories and other events that happened around August 23rd, 2000.

Check out our personality summary for people who were born on August 23rd, 2000.

Television shows that people were watching in August, 2000.

Popular video games that people were playing in August of 2000.

If you are looking for some childhood nostalgia, then you should check out August 23rd, 2006 instead.

Bill Clinton was the President of the United States on August 23rd, 2000.

Tony Blair was the Prime Minister of the United Kingdom on August 23rd, 2000.

Find out what your age was on August 23rd, 2000, by entering your DOB below.
This information is not saved on our server.