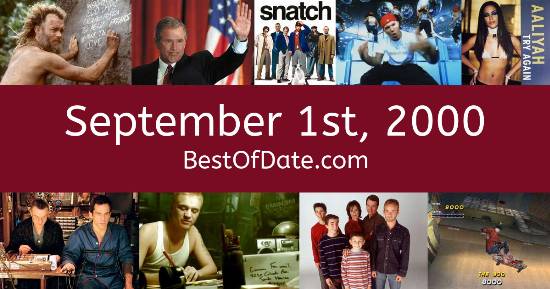 Songs that were on top of the music singles charts in the USA and the United Kingdom on September 1st, 2000.

The date is September 1st, 2000, and it's a Friday. Anyone born today will have the star sign Virgo. Currently, people have "that Friday feeling" and are looking forward to the weekend.

Schools and colleges are starting again and Autumn has officially arrived. As a result, temperatures are beginning to cool and trees are starting to shed their leaves. In the United States, it is the Friday before Labor Day weekend and many Americans are planning barbecues and other gatherings. In America, the song Doesn't Really Matter by Janet Jackson is on top of the singles charts.

Over in the UK, Groovejet by Spiller is the number one hit song. Bill Clinton is currently the President of the United States, and the movie Bring It On is at the top of the Box Office. In the United Kingdom, Tony Blair is the current Prime Minister.

Meanwhile, the Nokia 3310 is one of the most popular cell phones on the market at the moment. Stores across the world are currently selling a wide range of custom covers for the phone. If you were to travel back to this day, notable figures such as Yokozuna, Dale Earnhardt, Joey Ramone and Aaliyah would all be still alive. On TV, people are watching popular shows such as "Last of the Summer Wine", "Sex and the City", "The Sopranos" and "Futurama".

Meanwhile, gamers are playing titles such as "WWF Attitude", "Grand Theft Auto 2", "Rayman 2: The Great Escape" and "Crazy Taxi". Children and teenagers are currently watching television shows such as "Sabrina the Teenage Witch", "Dora the Explorer", "Roswell" and "Grizzly Tales for Gruesome Kids". Popular toys at the moment include the likes of the Nintendo 64, Betty Spaghetty (doll), Finger skateboards and Poo-Chi (robot dog).

These are trending news stories and fads that were prevalent at this time. These are topics that would have been in the media on September 1st, 2000.

News stories and other events that happened around September 1st, 2000.

Check out our personality summary for people who were born on September 1st, 2000.

Television shows that people were watching in September, 2000.

Popular video games that people were playing in September of 2000.

If you are looking for some childhood nostalgia, then you should check out September 1st, 2006 instead.

American country singer. Deceased
Born on September 1st, 1933
He was not alive on this date.

Bill Clinton was the President of the United States on September 1st, 2000.

Tony Blair was the Prime Minister of the United Kingdom on September 1st, 2000.

Find out what your age was on September 1st, 2000, by entering your DOB below.
This information is not saved on our server.

Here are some fun statistics about September 1st, 2000.