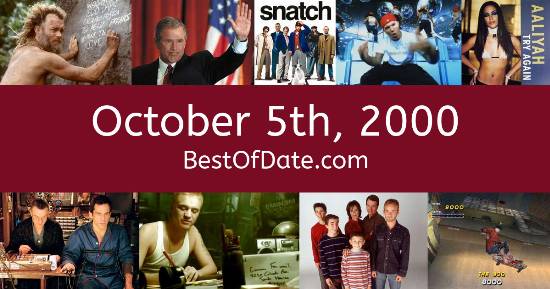 Songs that were on top of the music singles charts in the USA and the United Kingdom on October 5th, 2000.

The movie "Remember the Titans" was at the top of the Box Office on October 5th, 2000.

The date is October 5th, 2000, and it's a Thursday. Anyone born today will have the star sign Libra. The summer is long gone. Temperatures have started to become much cooler and the evenings are beginning to get darker.

Bill Clinton is currently the President of the United States, and the movie Remember the Titans is at the top of the Box Office. In the United Kingdom, Tony Blair is the current Prime Minister. A relatively new form of communication called "text messaging" is continuing to explode in popularity. Although the technology has been around since the mid-1990s, it was only recently that cell providers started to allow users to send SMS messages to people on different networks.

If you were to travel back to this day, notable figures such as Yokozuna, Dale Earnhardt, Joey Ramone and Aaliyah would all be still alive. On TV, people are watching popular shows such as "Frasier", "Xena: Warrior Princess", "3rd Rock from the Sun" and "Ally McBeal". Meanwhile, gamers are playing titles such as "Super Smash Bros.", "WWF Attitude", "Donkey Kong 64" and "Gran Turismo 2".

Kids and teenagers are watching TV shows such as "Pokemon", "Men in Black: The Series", "Grizzly Tales for Gruesome Kids" and "Static Shock". If you're a kid or a teenager, then you're probably playing with toys such as the Nintendo 64, Gogo's Crazy Bones, Groovy Girls and Finger skateboards.

These are trending news stories and fads that were prevalent at this time. These are topics that would have been in the media on October 5th, 2000.

News stories and other events that happened around October 5th, 2000.

Check out our personality summary for people who were born on October 5th, 2000.

Television shows that people were watching in October, 2000.

Popular video games that people were playing in October of 2000.

If you are looking for some childhood nostalgia, then you should check out October 5th, 2006 instead.

Bill Clinton was the President of the United States on October 5th, 2000.

Tony Blair was the Prime Minister of the United Kingdom on October 5th, 2000.

Find out what your age was on October 5th, 2000, by entering your DOB below.
This information is not saved on our server.

Here are some fun statistics about October 5th, 2000.