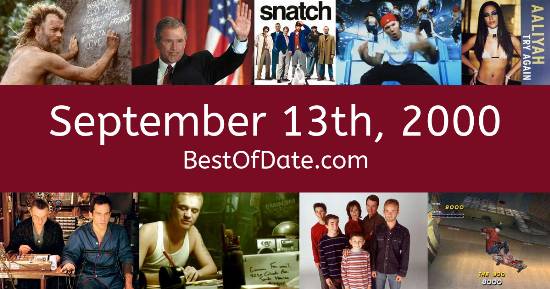 Songs that were on top of the music singles charts in the USA and the United Kingdom on September 13th, 2000.

The date is September 13th, 2000 and it's a Wednesday. Anyone born today will have the star sign Virgo. Schools have started back and autumn has arrived, so temperatures have started to cool and trees are beginning to shed their leaves.

In America, the song Doesn't Really Matter by Janet Jackson is on top of the singles charts. Over in the UK, Take On Me by A1 is the number one hit song. Bill Clinton is currently the President of the United States and the movie Bring It On is at the top of the Box Office.

In the United Kingdom, Tony Blair is the current Prime Minister. In technology news, more and more music companies are beginning to release MP3 players. The new MP3 format means that music listeners are able to listen to multiple albums on the go. It's the year 2000, so the music charts are being dominated by the likes of Christina Aguilera, Faith Hill, Savage Garden, Destiny's Child, Santana, Sisqó, Creed, Aaliyah and Enrique Iglesias.

Meanwhile, the Nokia 3310 is one of the most popular cell phones on the market at the moment. Stores across the world are currently selling a wide range of custom covers for the phone. On TV, people are watching popular shows such as "Touched by an Angel", "That '70s Show", "Charmed" and "Malcolm in the Middle". Meanwhile, gamers are playing titles such as "Age of Empires II: The Age of Kings", "The Sims", "Pokémon Stadium" and "Resident Evil – Code: Veronica".

Kids and teenagers are watching TV shows such as "Hang Time", "Sabrina the Teenage Witch", "Recess" and "Bob the Builder". If you're a kid or a teenager, then you're probably playing with toys such as the PlayStation (PS1), Groovy Girls, the Game Boy Color and the Dreamcast.

If you are looking for some childhood nostalgia, then check out September 13th, 2006 instead.

Bill Clinton was the President of the United States on September 13th, 2000.

Tony Blair was the Prime Minister of the United Kingdom on September 13th, 2000.

Enter your date of birth below to find out how old you were on September 13th, 2000.

Here are some fun statistics about September 13th, 2000.