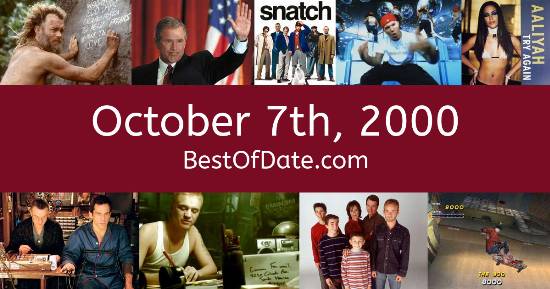 Songs that were on top of the music singles charts in the USA and the United Kingdom on October 7th, 2000.

The movie "Remember the Titans" was at the top of the box office on October 7th, 2000.

The date is October 7th, 2000 and it's a Saturday. Anyone born today will have the star sign Libra. Currently, people are enjoying their weekend.

The summer is long gone. Temperatures have started to become much cooler and the evenings are beginning to get darker. Fallen leaves have carpeted driveways, lawns, pathways and sidewalks and there's a fresh earthy scent in the ear. In America, the song Music by Madonna is on top of the singles charts.

Over in the UK, Against All Odds by Mariah Carey & Westlife is the number one hit song. Bill Clinton is currently the President of the United States and the movie Remember the Titans is at the top of the Box Office. In the United Kingdom, Tony Blair is the current Prime Minister.

Meanwhile, the Nokia 3310 is one of the most popular cell phones on the market at the moment. Stores across the world are currently selling a wide range of custom covers for the phone. If you were to travel back to this day, notable figures such as Yokozuna, Dale Earnhardt, Joey Ramone and Aaliyah would all be still alive. On TV, people are watching popular shows such as "Touched by an Angel", "7th Heaven", "Stargate SG-1" and "Two Guys, a Girl and a Pizza Place".

Meanwhile, gamers are playing titles such as "Crazy Taxi", "Diablo II", "ECW Anarchy Rulz" and "Mario Tennis". Children and teenagers are currently watching television shows such as "CatDog", "The Wild Thornberrys", "SpongeBob SquarePants" and "The Amanda Show". If you're a kid or a teenager, then you're probably playing with toys such as Finger skateboards, Poo-Chi (robot dog), HitClips audio player and Tekno the Robotic Puppy.

If you are looking for some childhood nostalgia, then check out October 7th, 2006 instead.

Bill Clinton was the President of the United States on October 7th, 2000.

Tony Blair was the Prime Minister of the United Kingdom on October 7th, 2000.

Enter your date of birth below to find out how old you were on October 7th, 2000.

Here are some fun statistics about October 7th, 2000.