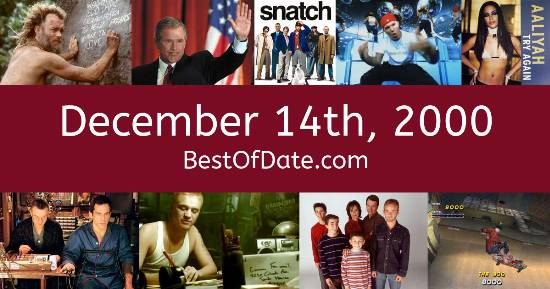 These songs were on top of the music charts in the United States and the United Kingdom on December 14th, 2000.

The movie "The Grinch" was at the top of the Box Office on this day.

The date is December 14th, 2000, and it's a Thursday. Anyone born today will have the star sign Sagittarius. The Christmas season of 2000 is in full swing. People are putting up their decorations and festive songs are playing on the radio.

In America, the song Independent Women Part 1 by Destiny's Child is on top of the singles charts. Over in the UK, Never Had A Dream Come True by S Club 7 is the number one hit song. Bill Clinton is currently the President of the United States, and the movie The Grinch is at the top of the Box Office.

If you were to travel back to this day, notable figures such as Dale Earnhardt, Joey Ramone, Aaliyah and Thuy Trang would all be still alive. On TV, people are watching popular shows such as "Frasier", "JAG", "Ally McBeal" and "Will & Grace". Meanwhile, gamers are playing titles such as "Pokémon Red and Blue", "Dead or Alive 2", "Syphon Filter 2" and "Banjo-Tooie".

Kids and teenagers are watching TV shows such as "Hang Time", "Recess", "Bear in the Big Blue House" and "As Told by Ginger". Popular toys at the moment include the likes of Gogo's Crazy Bones, the Dreamcast, Poo-Chi (robot dog) and HitClips audio player.

These are trending news stories and fads that were prevalent at this time. These are topics that would have been in the media on December 14th, 2000.

Check out our personality summary for people who were born on December 14th, 2000.

Television shows that people were watching in December, 2000.

Popular video games that people were playing in December of 2000.

If you are looking for some childhood nostalgia, then you should check out December 14th, 2006 instead.

Bill Clinton was the President of the United States on December 14th, 2000.

Tony Blair was the Prime Minister of the United Kingdom on December 14th, 2000.

Enter your date of birth below to find out how old you were on December 14th, 2000.
This information is not transmitted to our server.

Here are some fun statistics about December 14th, 2000.