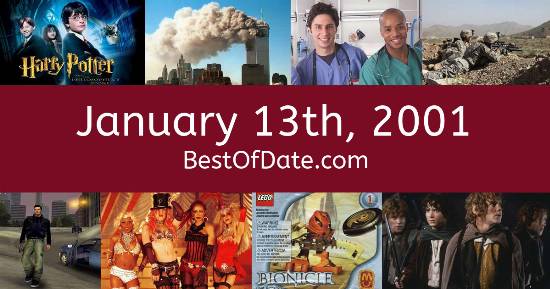 Songs that were on top of the music singles charts in the USA and the United Kingdom on January 13th, 2001.

The date is January 13th, 2001 and it's a Saturday. Anyone born today will have the star sign Capricorn. Currently, people are enjoying their weekend.

The Christmas holiday season is long over, the decorations have been taken down and a sense of normality has returned. In America, the song Independent Women Part 1 by Destiny's Child is on top of the singles charts. Over in the UK, Touch Me by Rui da Silva is the number one hit song.

Bill Clinton is currently the President of the United States and the movie Cast Away is at the top of the Box Office. In the United Kingdom, Tony Blair is the current Prime Minister. In technology news, more and more music companies are beginning to release MP3 players. The new MP3 format means that music listeners are able to listen to multiple albums on the go.

Meanwhile, the Nokia 3310 is one of the most popular cell phones on the market at the moment. Stores across the world are currently selling a wide range of custom covers for the phone. It's 2001, so the music charts are being dominated by the likes of Christina Aguilera, Janet Jackson, OutKast, Crazy Town, Destiny's Child, Usher, Alicia Keys, Blu Cantrell and Jennifer Lopez. On TV, people are watching popular shows such as "Touched by an Angel", "Xena: Warrior Princess", "King of the Hill" and "The King of Queens".

Meanwhile, gamers are playing titles such as "Resident Evil – Code: Veronica", "Deus Ex", "Colin McRae Rally 2.0" and "The Legend of Zelda: Majora's Mask". Children and teenagers are currently watching television shows such as "Daria", "That '70s Show", "The Powerpuff Girls" and "Ed, Edd n Eddy". Popular toys at the moment include the likes of the Dreamcast, Poo-Chi (robot dog), Razor (scooter) and the PlayStation 2.

Bill Clinton was the President of the United States on January 13th, 2001.

Tony Blair was the Prime Minister of the United Kingdom on January 13th, 2001.

Enter your date of birth below to find out how old you were on January 13th, 2001.

Here are some fun statistics about January 13th, 2001.