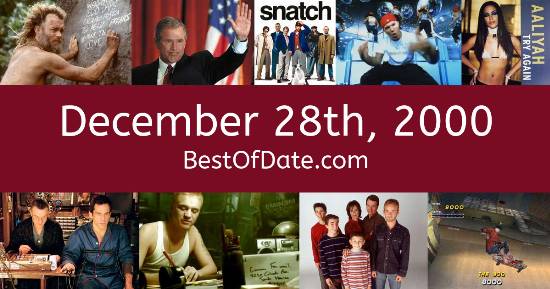 Songs that were on top of the music singles charts in the USA and the United Kingdom on December 28th, 2000.

The date is December 28th, 2000 and it's a Thursday. Anyone born today will have the star sign Capricorn. Christmas Day of 2000 has just passed and many people are relaxing at home and enjoying the holiday season.

In America, the song Independent Women Part 1 by Destiny's Child is on top of the singles charts. Over in the UK, Can We Fix It by Bob the Builder is the number one hit song. Bill Clinton is currently the President of the United States and the movie What Women Want is at the top of the Box Office.

If you were to travel back to this day, notable figures such as Dale Earnhardt, Joey Ramone, Aaliyah and Thuy Trang would all be still alive. On TV, people are watching popular shows such as "Walker, Texas Ranger", "Ally McBeal", "Dawson's Creek" and "The Royle Family". Meanwhile, gamers are playing titles such as "Dead or Alive 2", "Colin McRae Rally 2.0", "Tony Hawk's Pro Skater 2" and "Baldur's Gate II: Shadows of Amn".

Children and teenagers are currently watching television shows such as "Dexter's Laboratory", "Daria", "Batman Beyond" and "Malcolm in the Middle". Popular toys at the moment include the likes of Gogo's Crazy Bones, Betty Spaghetty (doll), Finger skateboards and Poo-Chi (robot dog).

If you are looking for some childhood nostalgia, then check out December 28th, 2006 instead.

Bill Clinton was the President of the United States on December 28th, 2000.

Tony Blair was the Prime Minister of the United Kingdom on December 28th, 2000.

Enter your date of birth below to find out how old you were on December 28th, 2000.

Here are some fun statistics about December 28th, 2000.