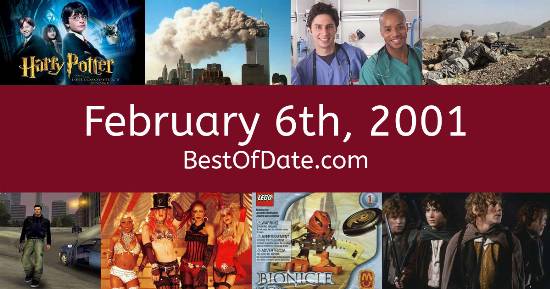 These songs were on top of the music charts in the United States and the United Kingdom on February 6th, 2001.

The movie "Wedding Planner" was at the top of the Box Office on February 6th, 2001.

The date is February 6th, 2001, and it's a Tuesday. Anyone born today will have the star sign Aquarius. In America, the song It Wasn't Me by Shaggy is on top of the singles charts.

Over in the UK, Whole Again by Atomic Kitten is the number one hit song. George W. Bush Jnr. is currently the President of the United States, and the movie Wedding Planner is at the top of the Box Office. In the United Kingdom, Tony Blair is the current Prime Minister.

It's 2001, so the music charts are being dominated by the likes of Christina Aguilera, Janet Jackson, OutKast, Crazy Town, Destiny's Child, Usher, Alicia Keys, Blu Cantrell and Jennifer Lopez. The file-sharing website "Napster" is at the peak of its popularity. If you were to travel back to this day, notable figures such as Dale Earnhardt, Joey Ramone, Aaliyah and Thuy Trang would all be still alive.

On TV, people are watching popular shows such as "King of the Hill", "The Royle Family", "The King of Queens" and "Charmed". Meanwhile, gamers are playing titles such as "Perfect Dark", "Mario Tennis", "WWF No Mercy" and "Banjo-Tooie". Children and teenagers are currently watching television shows such as "Teletubbies", "Men in Black: The Series", "Courage the Cowardly Dog" and "Lizzie McGuire".

If you're a kid or a teenager, then you're probably playing with toys such as Betty Spaghetty (doll), Poo-Chi (robot dog), Tekno the Robotic Puppy and the PlayStation 2.

These are trending news stories and fads that were prevalent at this time. These are topics that would have been in the media on February 6th, 2001.

Check out our personality summary for people who were born on February 6th, 2001.

Television shows that people were watching in February, 2001.

Popular video games that people were playing in February of 2001.

If you are looking for some childhood nostalgia, then you should check out February 6th, 2007 instead.

George W. Bush Jnr. was the President of the United States on February 6th, 2001.

Tony Blair was the Prime Minister of the United Kingdom on February 6th, 2001.

Enter your date of birth below to find out how old you were on February 6th, 2001.
This information is not transmitted to our server.

Here are some fun statistics about February 6th, 2001.