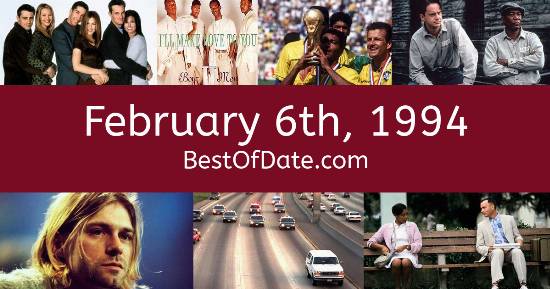 Songs that were on top of the music singles charts in the USA and the United Kingdom on February 6th, 1994.

The date is February 6th, 1994 and it's a Sunday. Anyone born today will have the star sign Aquarius. Currently, people are enjoying their weekend.

In America, the song All For Love by Bryan Adams, Rod Stewart & Sting is on top of the singles charts. Over in the UK, Things Can Only Get Better by D:ream is the number one hit song. Bill Clinton is currently the President of the United States and the movie Mrs. Doubtfire is at the top of the Box Office.

In soccer, Liverpool manager Graeme Souness has resigned following a recent defeat against Bristol City in the FA Cup. He has been replaced by Roy Evans. In music, rock band Green Day have just released their new album "Dookie". The album contains songs such as "Longview" and "Basket Case". In celebrity news, Jean-Claude Van Damme has married actress Darcy LaPier.

A new comedy film called "Ace Ventura: Pet Detective", starring Jim Carrey, has recently been released in movie theaters. In Mississippi, white supremacist Byron De La Beckwith has been convicted of the 1963 murder of civil rights leader Medgar Evers. In Europe, a war is continuing to rage on in Bosnia and Herzegovina. Recently, 68 people were killed when the Bosnian Serb Army fired a mortar shell at an open air market place in Sarajevo.

If you were to travel back to this day, notable figures such as Bill Hicks, John Candy, Kurt Cobain and Richard Nixon would all be still alive. On TV, people are watching popular shows such as "Star Trek: The Next Generation", "Family Matters", "Home Improvement" and "The X-Files". Meanwhile, gamers are playing titles such as "Bubsy in Claws Encounters of the Furred Kind", "Syndicate", "Myst" and "Sonic Spinball".

Kids and teenagers are watching TV shows such as "Rosie and Jim", "Beverly Hills, 90210", "Home Improvement" and "Boy Meets World". Popular toys at the moment include the likes of the Sega Genesis / Mega Drive, the Talkboy, Action Man and Power Rangers figures.

If you are looking for some childhood nostalgia, then check out February 6th, 2000 instead.

Bill Clinton was the President of the United States on February 6th, 1994.

John Major was the Prime Minister of the United Kingdom on February 6th, 1994.

Enter your date of birth below to find out how old you were on February 6th, 1994.

Here are some fun statistics about February 6th, 1994.

Have something to say about February 6th, 1994?