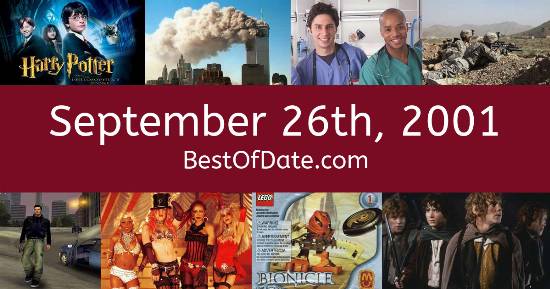 Songs that were on top of the music singles charts in the USA and the United Kingdom on September 26th, 2001.

The date is September 26th, 2001 and it's a Wednesday. Anyone born today will have the star sign Libra. Schools have started back and autumn has arrived, so temperatures have started to cool and trees are beginning to shed their leaves.

The earthy smells of fall have started to fill the air. In America, the song Fallin' by Alicia Keys is on top of the singles charts. Over in the UK, Can't Get You Out Of My Head by Kylie Minogue is the number one hit song.

George W. Bush Jnr. is currently the President of the United States and the movie Hardball is at the top of the Box Office. In the United Kingdom, Tony Blair is the current Prime Minister. The Nokia 3310 is one of the most popular cell phones on the market at the moment. Stores across the world are currently selling a wide range of custom covers for the phone.

It's 2001, so the music charts are being dominated by the likes of Christina Aguilera, Janet Jackson, OutKast, Crazy Town, Destiny's Child, Usher, Alicia Keys, Blu Cantrell and Jennifer Lopez. An outbreak of foot-and-mouth disease in the United Kingdom is currently causing a crisis in the British agriculture and tourism sectors. Cows and sheep are currently being killed in an effort to halt the disease. The world is in a complete state of shock after the September 11 attacks, which brought down the World Trade Center and killed 3,000 people.

On TV, people are watching popular shows such as "7th Heaven", "Buffy the Vampire Slayer", "Sex and the City" and "Jackass". Meanwhile, gamers are playing titles such as "Baldur's Gate II: Shadows of Amn", "Final Fantasy X", "Max Payne" and "Silent Hill 2". Children and teenagers are currently watching television shows such as "Dexter's Laboratory", "City Guys", "Bear in the Big Blue House" and "CatDog".

If you're a kid or a teenager, then you're probably playing with toys such as Groovy Girls, Poo-Chi (robot dog), Razor (scooter) and the PlayStation 2.

George W. Bush Jnr. was the President of the United States on September 26th, 2001.

Tony Blair was the Prime Minister of the United Kingdom on September 26th, 2001.

Enter your date of birth below to find out how old you were on September 26th, 2001.

Here are some fun statistics about September 26th, 2001.

Leave a comment and tell everyone why September 26th, 2001 is important to you.