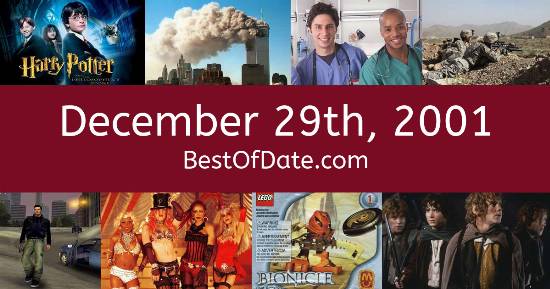 Songs that were on top of the music singles charts in the USA and the United Kingdom on December 29th, 2001.

The movie "The Lord of the Rings: The Fellowship of the Ring" was at the top of the box office on December 29th, 2001.

The date is December 29th, 2001 and it's a Saturday. Anyone born today will have the star sign Capricorn. Currently, people are enjoying their weekend.

Christmas Day of 2001 has just passed and many people are relaxing at home and enjoying the holiday season. In America, the song How You Remind Me by Nickelback is on top of the singles charts. Over in the UK, Something Stupid by Robbie Williams & Nicole Kidman is the number one hit song.

George W. Bush Jnr. is currently the President of the United States and the movie The Lord of the Rings: The Fellowship of the Ring is at the top of the Box Office. In the United Kingdom, Tony Blair is the current Prime Minister. A relatively new form of communication called "text messaging" is continuing to explode in popularity. Although the technology has been around since the mid-1990s, it was only recently that cell providers started to allow users to send SMS messages to people on different networks.

If you were to travel back to this day, notable figures such as Left Eye, The British Bulldog, John Gotti and Jam Master Jay would all be still alive. On TV, people are watching popular shows such as "Sex and the City", "The Royle Family", "Fear Factor" and "Smallville". Meanwhile, gamers are playing titles such as "Colin McRae Rally 2.0", "RuneScape", "Twisted Metal: Black" and "WWF SmackDown! Just Bring It".

Kids and teenagers are watching TV shows such as "Little Bear", "Ed, Edd n Eddy", "Lizzie McGuire" and "My Wife and Kids". Popular toys at the moment include the likes of Betty Spaghetty (doll), HitClips audio player, Bratz dolls and the Game Boy Advance.

If you are looking for some childhood nostalgia, then check out December 29th, 2007 instead.

George W. Bush Jnr. was the President of the United States on December 29th, 2001.

Tony Blair was the Prime Minister of the United Kingdom on December 29th, 2001.

Enter your date of birth below to find out how old you were on December 29th, 2001.

Here are some fun statistics about December 29th, 2001.