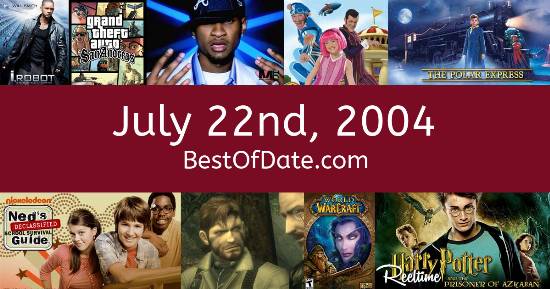 Songs that were on top of the music singles charts in the USA and the United Kingdom on July 22nd, 2004.

The date is July 22nd, 2004 and it's a Thursday. Anyone born today will have the star sign Cancer. It's summer, so the temperatures are warmer and the evenings are longer than usual.

In America, the song Confessions Part II by Usher is on top of the singles charts. Over in the UK, Lola's Theme by Shapeshifters is the number one hit song. George W. Bush Jnr. is currently the President of the United States and the movie I, Robot is at the top of the Box Office.

If you were to travel back to this day, notable figures such as Rick James, Big Boss Man, ODB and Dimebag Darrell would all be still alive. On TV, people are watching popular shows such as "Everybody Loves Raymond", "King of the Hill", "24" and "The Apprentice". Meanwhile, gamers are playing titles such as "Castlevania: Aria of Sorrow", "The Simpsons Hit & Run", "Prince of Persia: The Sands of Time" and "Manhunt".

Children and teenagers are currently watching television shows such as "Rugrats", "Grounded for Life", "One Tree Hill" and "Drake & Josh". If you're a kid or a teenager, then you're probably playing with toys such as the PlayStation 2, Yu-Gi-Oh! Trading Card Game, VideoNow (portable player) and RoboSapien (toy robot).

If you are looking for some childhood nostalgia, then check out July 22nd, 2010 instead.

Tony Blair was the Prime Minister of the United Kingdom on July 22nd, 2004.