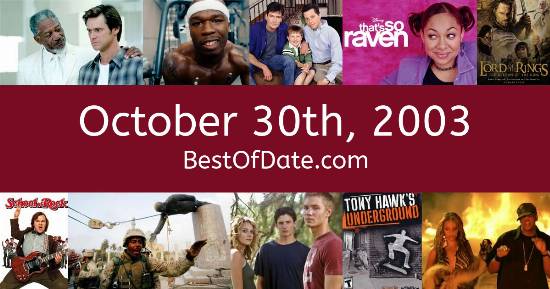 Songs that were on top of the music singles charts in the USA and the United Kingdom on October 30th, 2003:

The date is October 30th, 2003 and it's a Thursday. Anyone born today will have the star sign Scorpio. The summer is long gone. Temperatures have started to become much cooler and the evenings are beginning to get darker.

Fallen leaves have carpeted driveways, lawns, pathways and sidewalks and there's a fresh earthy scent in the ear. Halloween of 2003 is just days away. People are watching horror movies and thinking about which costume they are going to wear. Others are organizing parties. In America, the song Baby Boy by Beyonce is on top of the singles charts.

Over in the UK, Be Faithful by Fatman Scoop is the number one hit song. George W. Bush Jnr. is currently the President of the United States and the movie Texas Chainsaw Massacre is at the top of the Box Office. In the United Kingdom, Tony Blair is the current Prime Minister.

A popular software program called LimeWire is being used by many people to share MP3 files (and viruses). It's 2003, so the music charts are being dominated by the likes of 50 Cent, R. Kelly, Sean Paul, 3 Doors Down, Nelly, Evanescence, Chingy and Beyonce. Internet users are using MSN Messenger to chat with each other online.

A flash animation of badgers singing "badger, badger, badger" has become extremely popular on the Internet. The animation, which loops indefinitely, was published by British animator Jonti Picking in September, 2003. On TV, people are watching popular shows such as "Everybody Loves Raymond", "Scrubs", "The Wire" and "Punk'd". Meanwhile, gamers are playing titles such as "Animal Crossing", "Tom Clancy's Splinter Cell", "Star Wars: Knights of the Old Republic" and "Call of Duty".

Children and teenagers are currently watching television shows such as "7th Heaven", "Bear in the Big Blue House", "Bob the Builder" and "Rocket Power". Popular toys include the likes of "PlayStation 2", "Bratz (dolls)", "Nintendo GameCube" and "Yu-Gi-Oh! Trading Card Game".

Who was the Prime Minister of the United Kingdom on October 30th, 2003?

Enter your date of birth below to find out how old you were on October 30th, 2003.

Looking for some nostalgia? Here are some Youtube videos relating to October 30th, 2003. Please note that videos are automatically selected by Youtube and that results may vary! Click on the "Load Next Video" button to view the next video in the search playlist. In many cases, you'll find episodes of old TV shows, documentaries, music videos and soap dramas.

Here are some fun statistics about October 30th, 2003.