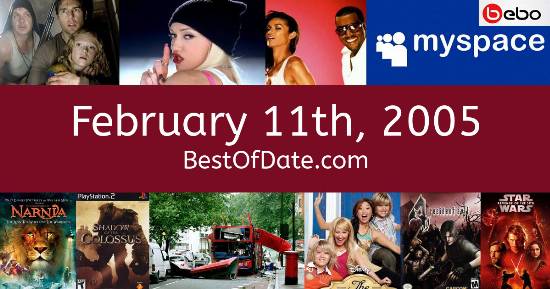 These songs were on top of the music charts in the United States and the United Kingdom on February 11th, 2005.

The movie "Boogeyman" was at the top of the Box Office on this day.

The date is February 11th, 2005, and it's a Friday. Anyone born today will have the star sign Aquarius. Currently, people have "that Friday feeling" and are looking forward to the weekend.

Valentine's Day is just around the corner. In America, the song Let Me Love You by Mario is on top of the singles charts. Over in the UK, It's Now Or Never by Elvis Presley is the number one hit song.

George W. Bush Jnr. is currently the President of the United States, and the movie Boogeyman is at the top of the Box Office. In the United Kingdom, Tony Blair is the current Prime Minister. In technology news, more and more people are beginning to gain access to the Internet. Internet speeds are increasing and MP3 sharing is beginning to threaten the existence of music stores.

If you were to travel back to this day, notable figures such as Johnnie Cochran, Pope John Paul II, Luther Vandross and Rosa Parks would all be still alive. On TV, people are watching popular shows such as "Last of the Summer Wine", "7th Heaven", "Futurama" and "Lost". Meanwhile, gamers are playing titles such as "Counter-Strike: Source", "Need for Speed: Underground 2", "Half-Life 2" and "World of Warcraft".

Children and teenagers are currently watching television shows such as "Grizzly Tales for Gruesome Kids", "As Told by Ginger", "Drake & Josh" and "Ned's Declassified School Survival Guide". If you're a kid or a teenager, then you're probably playing with toys such as Bratz dolls, Beyblades (spinning top toys), VideoNow (portable player) and RoboSapien (toy robot).

These are trending news stories and fads that were prevalent at this time. These are topics that would have been in the media on February 11th, 2005.

News stories and other events that happened around February 11th, 2005.

Check out our personality summary for people who were born on February 11th, 2005.

Television shows that people were watching in February, 2005.

Popular video games that people were playing in February of 2005.

If you are looking for some childhood nostalgia, then you should check out February 11th, 2011 instead.

George W. Bush Jnr. was the President of the United States on February 11th, 2005.

Tony Blair was the Prime Minister of the United Kingdom on February 11th, 2005.

Find out what your age was on February 11th, 2005, by entering your DOB below.
This information is not saved on our server.

Here are some fun statistics about February 11th, 2005.