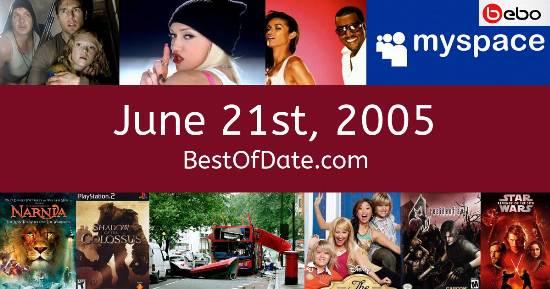 Songs that were on top of the music singles charts in the USA and the United Kingdom on June 21st, 2005.

The date is June 21st, 2005 and it's a Tuesday. Anyone born today will have the star sign Cancer. It's summer, so the temperatures are warmer and the evenings are longer than usual.

In America, the song We Belong Together by Mariah Carey is on top of the singles charts. Over in the UK, Crazy Frog by Axel F is the number one hit song. George W. Bush Jnr. is currently the President of the United States and the movie Mr. & Mrs. Smith is at the top of the Box Office.

Boxing legend Mike Tyson has retired after his recent fight against Kevin McBride. On TV, people are watching popular shows such as "The West Wing", "Malcolm in the Middle", "Scrubs" and "That's So Raven". Meanwhile, gamers are playing titles such as "Halo 2", "Half-Life 2", "God of War" and "Lego Star Wars: The Video Game".

Kids and teenagers are watching TV shows such as "7th Heaven", "That's So Raven", "Ned's Declassified School Survival Guide" and "Avatar: The Last Airbender". Popular toys at the moment include the likes of Yu-Gi-Oh! Trading Card Game, RoboSapien (toy robot), the Nintendo DS and the PSP.

A Spotify playlist of hit songs from 2005. Take a trip back to the peak days of Mario, Kanye West, 50 Cent and James Blunt.

Tony Blair was the Prime Minister of the United Kingdom on June 21st, 2005.

Leave a comment and tell everyone why June 21st, 2005 is important to you.