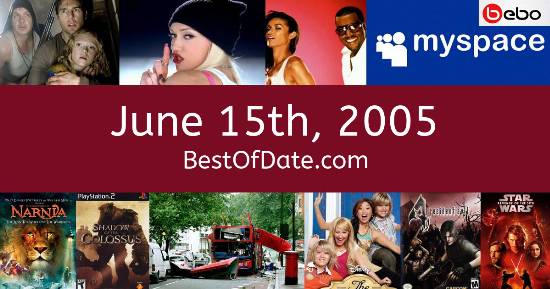 These songs were on top of the music charts in the United States and the United Kingdom on June 15th, 2005.

The movie "Mr. & Mrs. Smith" was at the top of the Box Office on this day.

The following comments about June 15th, 2005 were written by our visitors.

The date is June 15th, 2005, and it's a Wednesday. Anyone born today will have the star sign Gemini. It's summer, so the temperatures are warmer and the evenings are longer than usual.

In America, the song We Belong Together by Mariah Carey is on top of the singles charts. Over in the UK, Crazy Frog by Axel F is the number one hit song. George W. Bush Jnr. is currently the President of the United States, and the movie Mr. & Mrs. Smith is at the top of the Box Office.

It's 2005, so the music charts are being dominated by the likes of Mariah Carey, Gwen Stefani, Mario, Kelly Clarkson, 50 Cent, Kanye West and Ciara. Satirical factoids about actor Chuck Norris are extremely popular at the moment. These "Chuck Norris Facts" consist of absurd hyperbolic claims about Norris' toughness. Boxing legend Mike Tyson has retired after his recent fight against Kevin McBride.

Pop star Michael Jackson has been found not guilty on all charges. If you were to travel back to this day, notable figures such as Luther Vandross, Rosa Parks, Eddie Guerrero and George Best would all be still alive. On TV, people are watching popular shows such as "7th Heaven", "The King of Queens", "The O.C." and "Boston Legal".

Meanwhile, gamers are playing titles such as "Pokémon FireRed Version", "Killzone", "Need for Speed: Underground 2" and "Half-Life 2". Kids and teenagers are watching TV shows such as "The Fairly OddParents", "Kim Possible", "My Life as a Teenage Robot" and "American Dragon: Jake Long". If you're a kid or a teenager, then you're probably playing with toys such as Betty Spaghetty (doll), the PlayStation 2, the Nintendo DS and the PSP.

These are trending news stories and fads that were prevalent at this time. These are topics that would have been in the media on June 15th, 2005.

News stories and other events that happened around June 15th, 2005.

Check out our personality summary for people who were born on June 15th, 2005.

Television shows that people were watching in June, 2005.

Popular video games that people were playing in June of 2005.

If you are looking for some childhood nostalgia, then you should check out June 15th, 2011 instead.

Tony Blair was the Prime Minister of the United Kingdom on June 15th, 2005.

Find out what your age was on June 15th, 2005, by entering your DOB below.
This information is not saved on our server.