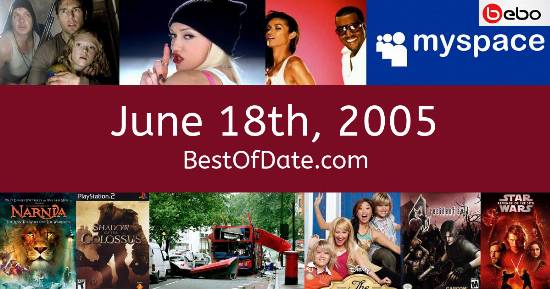 Songs that were on top of the music singles charts in the USA and the United Kingdom on June 18th, 2005.

The date is June 18th, 2005 and it's a Saturday. Anyone born today will have the star sign Gemini. Currently, people are enjoying their weekend.

It's summer, so the temperatures are warmer and the evenings are longer than usual. In America, the song We Belong Together by Mariah Carey is on top of the singles charts. Over in the UK, Crazy Frog by Axel F is the number one hit song.

George W. Bush Jnr. is currently the President of the United States and the movie Mr. & Mrs. Smith is at the top of the Box Office. In the United Kingdom, Tony Blair is the current Prime Minister. In technology news, more and more people are beginning to gain access to the Internet. Internet speeds are increasing and MP3 sharing is beginning to threaten the existence of music stores.

Boxing legend Mike Tyson has retired after his recent fight against Kevin McBride. Pop star Michael Jackson has been found not guilty on all charges. If you were to travel back to this day, notable figures such as Luther Vandross, Rosa Parks, Eddie Guerrero and George Best would all be still alive.

On TV, people are watching popular shows such as "Last of the Summer Wine", "Scrubs", "24" and "The Wire". Meanwhile, gamers are playing titles such as "RollerCoaster Tycoon 3", "Football Manager 2005", "Resident Evil 4" and "Gran Turismo 4". Kids and teenagers are watching TV shows such as "Bear in the Big Blue House", "Ed, Edd n Eddy", "Veronica Mars" and "Avatar: The Last Airbender".

Popular toys at the moment include the likes of the PlayStation 2, the Xbox, Beyblades (spinning top toys) and the Nintendo DS.

If you are looking for some childhood nostalgia, then check out June 18th, 2011 instead.

Tony Blair was the Prime Minister of the United Kingdom on June 18th, 2005.