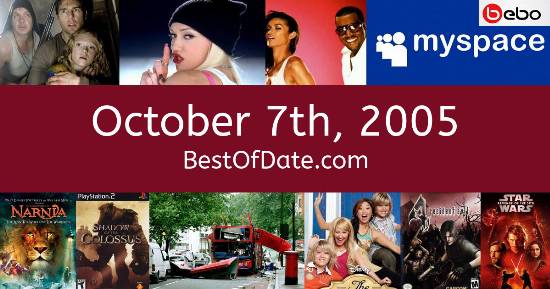 Songs that were on top of the music singles charts in the USA and the United Kingdom on October 7th, 2005.

The date is October 7th, 2005 and it's a Friday. Anyone born today will have the star sign Libra. Currently, people have "that Friday feeling" and are looking forward to the weekend.

The summer is long gone. Temperatures have started to become much cooler and the evenings are beginning to get darker. Fallen leaves have carpeted driveways, lawns, pathways and sidewalks and there's a fresh earthy scent in the ear. In America, the song Gold Digger by Kanye West & Jamie Foxx is on top of the singles charts.

Over in the UK, Don't Cha by Pussycat Dolls is the number one hit song. George W. Bush Jnr. is currently the President of the United States and the movie Wallace & Gromit is at the top of the Box Office. In the United Kingdom, Tony Blair is the current Prime Minister.

Cameras on phones have become the norm. Furthermore, the quality of these cameras are continuing to increase with each new phone release. We are now entering into an age where any event can be photographed or recorded in an instance. Practically every teenager and adult has a MySpace or a Bebo account. It's 2005, so the music charts are being dominated by the likes of Mariah Carey, Gwen Stefani, Mario, Kelly Clarkson, 50 Cent, Kanye West and Ciara.

Satirical factoids about actor Chuck Norris are extremely popular at the moment. These "Chuck Norris Facts" consist of absurd hyperbolic claims about Norris' toughness. If you were to travel back to this day, notable figures such as Rosa Parks, Eddie Guerrero, George Best and Richard Pryor would all be still alive. On TV, people are watching popular shows such as "That '70s Show", "The Royle Family", "Smallville" and "Arrested Development".

Meanwhile, gamers are playing titles such as "Tom Clancy's Splinter Cell: Pandora Tomorrow", "Grand Theft Auto: San Andreas", "World of Warcraft" and "Nintendogs". Children and teenagers are currently watching television shows such as "Dora the Explorer", "Jimmy Neutron", "Danny Phantom" and "Go, Diego, Go!". If you're a kid or a teenager, then you're probably playing with toys such as Betty Spaghetty (doll), the PlayStation 2, Bratz dolls and Yu-Gi-Oh! Trading Card Game.

If you are looking for some childhood nostalgia, then check out October 7th, 2011 instead.

George W. Bush Jnr. was the President of the United States on October 7th, 2005.

Tony Blair was the Prime Minister of the United Kingdom on October 7th, 2005.

Enter your date of birth below to find out how old you were on October 7th, 2005.

Here are some fun statistics about October 7th, 2005.