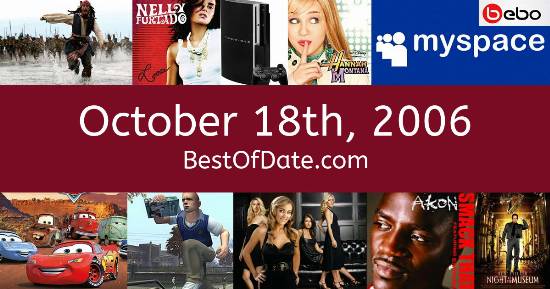 October 18th, 2006 relates to an event in a movie, book, game or television series:

Songs that were on top of the music singles charts in the USA and the United Kingdom on October 18th, 2006:

The date is October 18th, 2006 and it's a Wednesday. Anyone born today will have the star sign Libra. The summer is long gone. Temperatures have started to become much cooler and the evenings are beginning to get darker.

Fallen leaves have carpeted driveways, lawns, pathways and sidewalks and there's a fresh earthy scent in the ear. In America, the song Sexy Back by Justin Timberlake is on top of the singles charts. Over in the UK, Welcome To The Black Parade by My Chemical Romance is the number one hit song.

George W. Bush Jnr. is currently the President of the United States and the movie The Grudge 2 is at the top of the Box Office. In the United Kingdom, Tony Blair is the current Prime Minister. Practically every teenager and adult has a MySpace or a Bebo account.

It's 2006, so the music charts are being dominated by the likes of Daniel Powter, Sean Paul, Nelly Furtado, James Blunt, Gnarls Barkley, Shakira and Natasha Bedingfield. A rock music genre called "Emo" is extremely popular at the moment. The genre, which stands for "emotional hardcore", has created a subculture of "Emos" who dye their hair black and wear thick frame glasses. People are watching popular TV shows such as "24", "The Shield", "The Apprentice" and "Battlestar Galactica".

Meanwhile, gamers are playing titles such as "The Godfather", "Scarface: The World Is Yours", "Dead Rising" and "Just Cause". Children and teenagers are currently watching television shows such as "Peppa Pig", "Unfabulous", "Avatar: The Last Airbender" and "Go, Diego, Go!". Popular toys include the likes of "PlayStation 2", "The PSP" and "Xbox 360".

Celebrities and historical figures that were born on the 18th of October:

Who was the Prime Minister of the United Kingdom on October 18th, 2006?

Enter your date of birth below to find out how old you were on October 18th, 2006.

Looking for some nostalgia? Here are some Youtube videos relating to October 18th, 2006. Please note that videos are automatically selected by Youtube and that results may vary! Click on the "Load Next Video" button to view the next video in the search playlist. In many cases, you'll find episodes of old TV shows, documentaries, music videos and soap dramas.

Here are some fun statistics about October 18th, 2006.