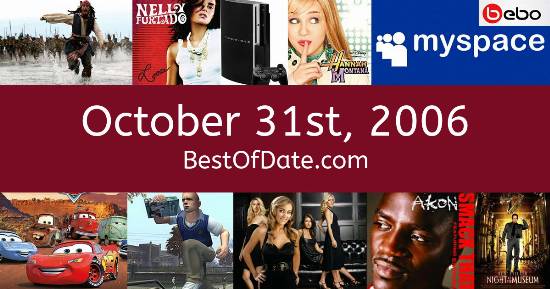 On October 31st, 2006, the following songs were at the top of the music charts in the USA and the UK.

The top "Box Office" movie on this date was the film "Saw III".

The following comments about October 31st, 2006 were written by our visitors.

The date is October 31st, 2006, and it's a Tuesday. Anyone born today will have the star sign Scorpio. The summer is long gone. Temperatures have started to become much cooler and the evenings are beginning to get darker.

Fallen leaves have carpeted driveways, lawns, pathways and sidewalks and there's a fresh earthy scent in the ear. It's Halloween, so kids are trick-or-treating and horror movies are being shown on TV. In America, the song Money Maker by Ludacris is on top of the singles charts.

Over in the UK, Star Girl by McFly is the number one hit song. George W. Bush Jnr. is currently the President of the United States, and the movie Saw III is at the top of the Box Office. In the United Kingdom, Tony Blair is the current Prime Minister.

A rock music genre called "Emo" is extremely popular at the moment. The genre, which stands for "emotional hardcore", has created a subculture of "Emos" who dye their hair black and wear thick frame glasses. If you were to travel back to this day, notable figures such as James Brown, Gerald Ford, Bam Bam Bigelow and Anna Nicole Smith would all be still alive. On TV, people are watching popular shows such as "The Sopranos", "One Tree Hill", "Grey's Anatomy" and "Bones".

Meanwhile, gamers are playing titles such as "Age of Empires III", "Tom Clancy's Ghost Recon Advanced Warfighter", "The Godfather" and "Kingdom Hearts II". Children and teenagers are currently watching television shows such as "7th Heaven", "Danny Phantom", "American Dragon: Jake Long" and "Avatar: The Last Airbender". If you're a kid or a teenager, then you're probably playing with toys such as Betty Spaghetty (doll), Bratz dolls, RoboSapien (toy robot) and the Xbox 360.

These are trending news stories and fads that were prevalent at this time. These are topics that would have been in the media on October 31st, 2006.

News stories and other events that happened around October 31st, 2006.

Check out our personality summary for people who were born on October 31st, 2006.

Television shows that people were watching in October, 2006.

Popular video games that people were playing in October of 2006.

If you are looking for some childhood nostalgia, then you should check out October 31st, 2012 instead.

George W. Bush Jnr. was the President of the United States on October 31st, 2006.

Tony Blair was the Prime Minister of the United Kingdom on October 31st, 2006.

Find out what your age was on October 31st, 2006, by entering your DOB below.
This information is not saved on our server.

Here are some fun statistics about October 31st, 2006.