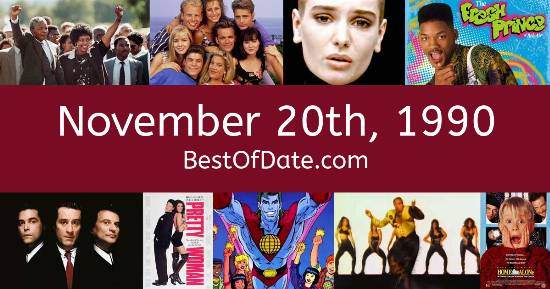 Songs that were on top of the music singles charts in the USA and the United Kingdom on November 20th, 1990.

The date is November 20th, 1990 and it's a Tuesday. Anyone born today will have the star sign Scorpio. In America, Thanksgiven Day of 1990 is just around the corner.

In Europe, the Soviet Union is continuing to dissolve. Pop star Madonna has just released her greatest hits album "The Immaculate Collection". New Zealand is in shock following the news that a mass shooting in Aramoana has claimed the lives of 13 people.

The films "Rocky V" and "Home Alone" have just been released in movie theaters. R&B group Milli Vanilli have been stripped of their Grammy following revelations that they had been lip-syncing. On TV, people are watching popular shows such as "Knots Landing", "Magnum, P.I.", "Only Fools and Horses" and "MacGyver".

Meanwhile, gamers are playing titles such as "Herzog Zwei", "Super Mario World", "Phantasy Star II" and "Castle of Illusion Starring Mickey Mouse". Kids and teenagers are watching TV shows such as "Alvin and the Chipmunks", "Muppet Babies", "DuckTales" and "Nellie the Elephant". If you're a kid or a teenager, then you're probably playing with toys such as Water Ring Toss, My Little Pony (figures), Sylvanian Families and Yo-yo.

If you are looking for some childhood nostalgia, then check out November 20th, 1996 instead.

Celebrities, historical figures and notable people who were born on the 20th of November.

George W. Bush Snr. was the President of the United States on November 20th, 1990.

Margaret Thatcher was the Prime Minister of the United Kingdom on November 20th, 1990.

Enter your date of birth below to find out how old you were on November 20th, 1990.

Here are some fun statistics about November 20th, 1990.