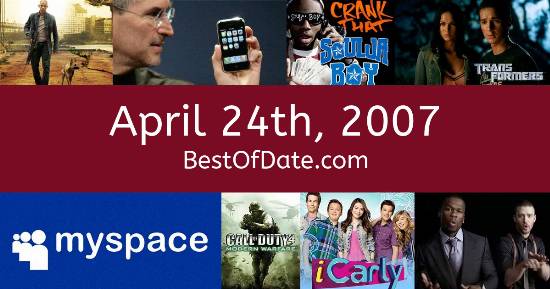 On April 24th, 2007, the following songs were at the top of the music charts in the USA and the UK.

The top "Box Office" movie on this date was the film "Blades of Glory".

The date is April 24th, 2007, and it's a Tuesday. Anyone born today will have the star sign Taurus. The summer of 2007 is drawing closer and temperatures have started to rise.

In America, the song Give It To Me by Timbaland, Nelly Furtado & Justin Timberlake is on top of the singles charts. Over in the UK, Beautiful Liar by Beyonce & Shakira is the number one hit song. George W. Bush Jnr. is currently the President of the United States, and the movie Blades of Glory is at the top of the Box Office.

Meanwhile, in technology news, more and more people are beginning to use the Internet on their phones. This transition towards mobile Internet has been aided by the recent roll-out of faster 3G networks and the introduction of larger touchscreen phones. It's 2007, so the music charts are being dominated by the likes of Beyoncé, Rihanna, Jay-Z, Sean Kingston, Soulja Boy and Nelly Furtado. Worries about the subprime mortgage market and a recession are continuing to grow. Real estate investment trust "New Century" has just filed for Chapter 11 bankruptcy protection and CNN are currently reporting that there has been a "meltdown" in the subprime mortgage.

In celebrity news, a voicemail of actor Alec Baldwin calling his 11-year-old daughter a "thoughtless pig" has just been leaked by TMZ. If you were to travel back to this day, notable figures such as Eddie Griffin, Luciano Pavarotti, Colin McRae and Ike Turner would all be still alive. On TV, people are watching popular shows such as "Scrubs", "Two and a Half Men", "Desperate Housewives" and "House".

Meanwhile, gamers are playing titles such as "Scarface: The World Is Yours", "Marvel: Ultimate Alliance", "Call of Duty 3" and "Resistance: Fall of Man". Children and teenagers are currently watching television shows such as "7th Heaven", "Danny Phantom", "Avatar: The Last Airbender" and "Hannah Montana". Popular toys at the moment include the likes of VideoNow (portable player), the Xbox 360, the Nintendo Wii and Iggle Piggle.

These are trending news stories and fads that were prevalent at this time. These are topics that would have been in the media on April 24th, 2007.

Check out our personality summary for people who were born on April 24th, 2007.

Television shows that people were watching in April, 2007.

Popular video games that people were playing in April of 2007.

If you are looking for some childhood nostalgia, then you should check out April 24th, 2013 instead.

Tony Blair was the Prime Minister of the United Kingdom on April 24th, 2007.

Enter your date of birth below to find out how old you were on April 24th, 2007.
This information is not transmitted to our server.