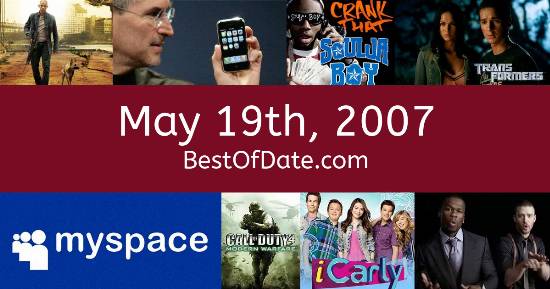 Songs that were on top of the music singles charts in the USA and the United Kingdom on May 19th, 2007.

The date is May 19th, 2007 and it's a Saturday. Anyone born today will have the star sign Taurus. Currently, people are enjoying their weekend.

The summer of 2007 has finally arrived. The weather has warmed up and the evenings are brighter than usual. In America, the song Makes Me Wonder by Maroon 5 is on top of the singles charts. Over in the UK, Baby's Coming Back by McFly is the number one hit song.

George W. Bush Jnr. is currently the President of the United States and the movie Shrek the Third is at the top of the Box Office. In the United Kingdom, Tony Blair is the current Prime Minister. Practically every teenager and adult has a MySpace or a Bebo account.

A rock music genre called "Emo" is extremely popular at the moment. The genre, which stands for "emotional hardcore", has created a subculture of "Emos" who dye their hair black and wear thick frame glasses. It's 2007, so the music charts are being dominated by the likes of Beyoncé, Rihanna, Jay-Z, Sean Kingston, Soulja Boy and Nelly Furtado. On TV, people are watching popular shows such as "Last of the Summer Wine", "ER", "24" and "Desperate Housewives".

Meanwhile, gamers are playing titles such as "Scarface: The World Is Yours", "Dead Rising", "Call of Duty 3" and "Resistance: Fall of Man". Children and teenagers are currently watching television shows such as "The Fairly OddParents", "That's So Raven", "The Hills" and "Curious George". If you're a kid or a teenager, then you're probably playing with toys such as the Xbox 360, the PlayStation 3 and the Nintendo Wii.

Notable events that occurred around May 19th, 2007.

Celebrities, historical figures and notable people who were born on the 19th of May.

Historical weather information for May 19th, 2007.

Tony Blair was the Prime Minister of the United Kingdom on May 19th, 2007.

Leave a comment and tell everyone why May 19th, 2007 is important to you.