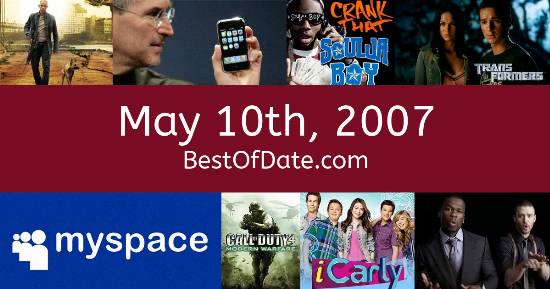 Songs that were on top of the music singles charts in the USA and the United Kingdom on May 10th, 2007.

The date is May 10th, 2007 and it's a Thursday. Anyone born today will have the star sign Taurus. The summer of 2007 has finally arrived. The weather has warmed up and the evenings are brighter than usual.

In America, the song Makes Me Wonder by Maroon 5 is on top of the singles charts. Over in the UK, Beautiful Liar by Beyonce & Shakira is the number one hit song. George W. Bush Jnr. is currently the President of the United States and the movie Disturbia is at the top of the Box Office.

On TV, people are watching popular shows such as "Last of the Summer Wine", "King of the Hill", "One Tree Hill" and "Boston Legal". Meanwhile, gamers are playing titles such as "Just Cause", "Battlefield 2142", "Final Fantasy XII" and "Medieval II: Total War". Children and teenagers are currently watching television shows such as "The Fairly OddParents", "Veronica Mars", "Curious George" and "Horrid Henry".

Popular toys at the moment include the likes of VideoNow (portable player), the Xbox 360, the PlayStation 3 and the Nintendo Wii.

Notable events that occurred around May 10th, 2007.

If you are looking for some childhood nostalgia, then check out May 10th, 2013 instead.

Historical weather information for May 10th, 2007.

Tony Blair was the Prime Minister of the United Kingdom on May 10th, 2007.