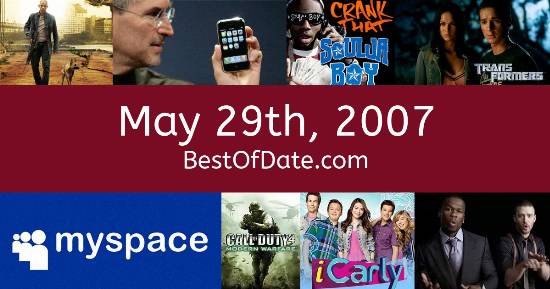 On May 29th, 2007, the following songs were at the top of the music charts in the USA and the UK.

Play the top singles from the year 2007.
A Spotify playlist of hit songs from 2007. Take a trip back to the peak days of Leona Lewis, Rihanna, Fergie and Gwen Stefani.

The top "Box Office" movie on this date was the film "Shrek the Third".

The date is May 29th, 2007, and it's a Tuesday. Anyone born today will have the star sign Gemini. The summer of 2007 has finally arrived. The weather has warmed up and the evenings are brighter than usual.

In America, the song Makes Me Wonder by Maroon 5 is on top of the singles charts. Over in the UK, Umbrella by Rihanna is the number one hit song. George W. Bush Jnr. is currently the President of the United States, and the movie Shrek the Third is at the top of the Box Office.

Meanwhile, in technology news, more and more people are beginning to use the Internet on their phones. This transition towards mobile Internet has been aided by the recent roll-out of faster 3G networks and the introduction of larger touchscreen phones. It's 2007, so the music charts are being dominated by the likes of Beyoncé, Rihanna, Jay-Z, Sean Kingston, Soulja Boy and Nelly Furtado. If you were to travel back to this day, notable figures such as Eddie Jamaal Griffin, Luciano Pavarotti, Colin McRae and Sean Taylor would all be still alive.

On TV, people are watching popular shows such as "ER", "Lost", "Desperate Housewives" and "It's Always Sunny in Philadelphia". Meanwhile, gamers are playing titles such as "Scarface: The World Is Yours", "Bully", "Medieval II: Total War" and "The Legend of Zelda: Twilight Princess". Kids and teenagers are watching TV shows such as "SpongeBob SquarePants", "Peppa Pig", "Unfabulous" and "Ben 10".

Popular toys at the moment include the likes of the Xbox 360, the PlayStation 3, the Nintendo Wii and Iggle Piggle.

These are trending news stories and fads that were prevalent at this time. These are topics that would have been in the media on May 29th, 2007.

News stories, pop culture trends, and other events that happened around May 29th, 2007.

Check out our personality summary for people who were born on May 29th, 2007.

Television shows that people were watching in May, 2007.

Popular video games that people were playing in May of 2007.

If you are looking for some childhood nostalgia, then you should check out May 29th, 2013, instead.

Celebrities, historical figures, and other notable people who were born on May 29th.

Historical weather information for May 29th, 2007.

Find out what your age was on May 29th, 2007, by entering your DOB below.
This information is not saved on our server.