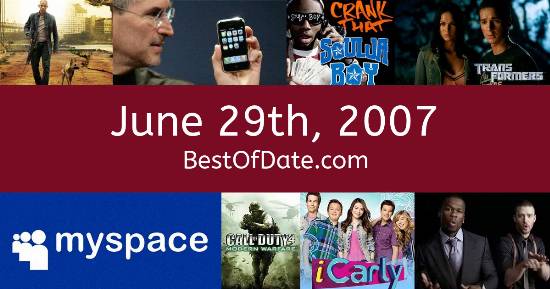 Songs that were on top of the music singles charts in the USA and the United Kingdom on June 29th, 2007.

The date is June 29th, 2007 and it's a Friday. Anyone born today will have the star sign Cancer. Currently, people have "that Friday feeling" and are looking forward to the weekend.

It's summer, so the temperatures are warmer and the evenings are longer than usual. The song Umbrella by Rihanna is on top of the singles charts in both the USA and the United Kingdom. George W. Bush Jnr. is currently the President of the United States and the movie Ratatouille is at the top of the Box Office.

Meanwhile, in technology news, more and more people are beginning to use the Internet on their phones. This transition towards mobile Internet has been aided by the recent roll-out of faster 3G networks and the introduction of larger touchscreen phones. It's 2007, so the music charts are being dominated by the likes of Beyoncé, Rihanna, Jay-Z, Sean Kingston, Soulja Boy and Nelly Furtado. The meltdown in the subprime mortgage market is continuing to worry experts. Investment bank Bear Stearns has had to bail out two of its hedge funds.

On TV, people are watching popular shows such as "Stargate SG-1", "Smallville", "CSI: Miami" and "Bones". Meanwhile, gamers are playing titles such as "Just Cause", "Marvel: Ultimate Alliance", "Call of Duty 3" and "Resistance: Fall of Man". Children and teenagers are currently watching television shows such as "Zoey 101", "The Suite Life of Zack & Cody", "Everybody Hates Chris" and "Ben 10".

Popular toys at the moment include the likes of the Xbox 360, the PlayStation 3 and the Nintendo Wii.

If you are looking for some childhood nostalgia, then check out June 29th, 2013 instead.

Gordon Brown was the Prime Minister of the United Kingdom on June 29th, 2007.