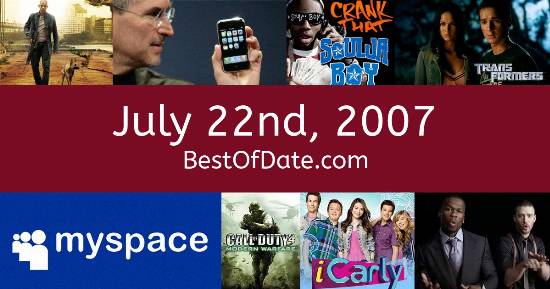 Songs that were on top of the music singles charts in the USA and the United Kingdom on July 22nd, 2007.

The movie "I Now Pronounce You Chuck and Larry" was at the top of the box office on July 22nd, 2007.

The date is July 22nd, 2007 and it's a Sunday. Anyone born today will have the star sign Cancer. Currently, people are enjoying their weekend.

It's summer, so the temperatures are warmer and the evenings are longer than usual. The song Umbrella by Rihanna is on top of the singles charts in both the USA and the United Kingdom. George W. Bush Jnr. is currently the President of the United States and the movie I Now Pronounce You Chuck and Larry is at the top of the Box Office.

If you're a kid or a teenager, then you're probably playing with toys such as VideoNow (portable player), the Xbox 360, the PlayStation 3 and Iggle Piggle.

If you are looking for some childhood nostalgia, then check out July 22nd, 2013 instead.

Gordon Brown was the Prime Minister of the United Kingdom on July 22nd, 2007.