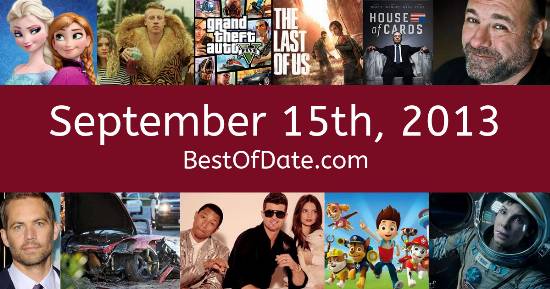 Songs that were on top of the music singles charts in the USA and the United Kingdom on September 15th, 2013.

The date is September 15th, 2013 and it's a Sunday. Anyone born today will have the star sign Virgo. Currently, people are enjoying their weekend.

Schools have started back and autumn has arrived, so temperatures have started to cool and trees are beginning to shed their leaves. The earthy smells of fall have started to fill the air. The song Roar by Katy Perry is on top of the singles charts in both the USA and the United Kingdom.

Barack Obama is currently the President of the United States and the movie Insidious Chapter 2 is at the top of the Box Office. In the United Kingdom, David Cameron is the current Prime Minister. Video rental stores such as Blockbuster are continuing to close their doors at the moment. This is due to the increasing popularity of online streaming services such as Netflix and Hulu.

It's 2013, so the music charts are being dominated by artists such as Macklemore, Robin Thicke, Imagine Dragons and Bruno Mars. A social networking website called Vine is extremely popular at the moment. Video game fans are currently excited about the upcoming release of Grand Theft Auto V. The game, which will take place in San Andreas, is set to be released on September 17th.

A new Internet meme called "Doge", which consists of an image of a Shiba Inu dog with broken English written on it, is being shared online at the moment. A new show called "Peaky Blinders" has just debuted on Netflix. In Ireland, there is shock at the news that the body of missing woman Elaine O'Hara has been discovered in the foothills of the Dublin Mountains. Elaine had been missing since August of last year. Meanwhile, it has just been announced that the country has officially exited its recession.

In celebrity news, NBA star LeBron James has married Savannah Brinson. If you were to travel back to this day, notable figures such as Paul Walker, Nelson Mandela, James Avery and Ariel Sharon would all be still alive. On TV, people are watching popular shows such as "Bones", "Black Mirror", "House of Cards" and "Orange Is the New Black".

Meanwhile, gamers are playing titles such as "BioShock Infinite", "Saints Row IV", "Tom Clancy's Splinter Cell: Blacklist" and "ARMA 3". Children and teenagers are currently watching television shows such as "Mickey Mouse Clubhouse", "Phineas and Ferb", "Good Luck Charlie" and "Jake and the Never Land Pirates". If you're a kid or a teenager, then you're probably playing with toys such as the Xbox 360, the PlayStation 3, Skylanders Giants figures and the Wii U.

If you are looking for some childhood nostalgia, then check out September 15th, 2019 instead.

Barack Obama was the President of the United States on September 15th, 2013.

David Cameron was the Prime Minister of the United Kingdom on September 15th, 2013.

Enter your date of birth below to find out how old you were on September 15th, 2013.

Here are some fun statistics about September 15th, 2013.