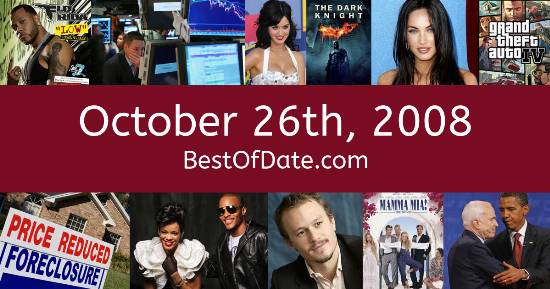 Songs that were on top of the music singles charts in the USA and the United Kingdom on October 26th, 2008.

The date is October 26th, 2008 and it's a Sunday. Anyone born today will have the star sign Scorpio. Currently, people are enjoying their weekend.

The summer is long gone. Temperatures have started to become much cooler and the evenings are beginning to get darker. Fallen leaves have carpeted driveways, lawns, pathways and sidewalks and there's a fresh earthy scent in the ear. Halloween of 2008 is just days away. People are watching horror movies and thinking about which costume they are going to wear. Others are organizing parties.

Barack Obama and John McCain are currently facing off against each other in the lead-up to the 2008 US Presidential Election. If you were to travel back to this day, notable figures such as John Costelloe, Test, Natasha Richardson and Jade Goody would all be still alive. On TV, people are watching popular shows such as "One Tree Hill", "Cold Case", "Boston Legal" and "How I Met Your Mother".

Meanwhile, gamers are playing titles such as "Call of Duty 4: Modern Warfare", "Assassin's Creed", "Grand Theft Auto IV" and "Metal Gear Solid 4: Guns of the Patriots". Children and teenagers are currently watching television shows such as "One Tree Hill", "Peppa Pig", "Go, Diego, Go!" and "iCarly". If you're a kid or a teenager, then you're probably playing with toys such as the PlayStation 3, Iggle Piggle, iPod Touch and WALL-E toys.

If you are looking for some childhood nostalgia, then check out October 26th, 2014 instead.

George W. Bush Jnr. was the President of the United States on October 26th, 2008.

Gordon Brown was the Prime Minister of the United Kingdom on October 26th, 2008.

Enter your date of birth below to find out how old you were on October 26th, 2008.

Here are some fun statistics about October 26th, 2008.