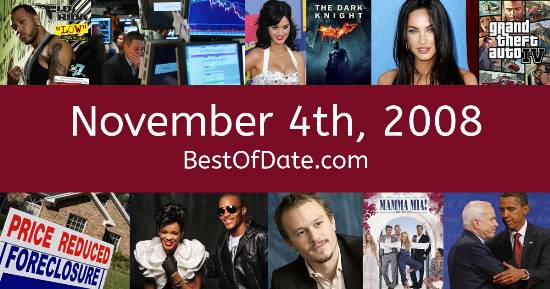 Songs that were on top of the music singles charts in the USA and the United Kingdom on November 4th, 2008.

The date is November 4th, 2008 and it's a Tuesday. Anyone born today will have the star sign Scorpio. It's November, so the evenings are getting darker and the days are getting colder.

In America, the song Whatever You Like by T.I. is on top of the singles charts. Over in the UK, Hero by X-Factor Finalists is the number one hit song. George W. Bush Jnr. is currently the President of the United States and the movie High School Musical 3 is at the top of the Box Office.

In the United States, people are voting on whether they want Barack Obama or John McCain to become the next president. If you were to travel back to this day, notable figures such as John Costelloe, Test, Natasha Richardson and Jade Goody would all be still alive. On TV, people are watching popular shows such as "Lost", "The Office", "Grey's Anatomy" and "Breaking Bad".

Meanwhile, gamers are playing titles such as "Call of Duty 4: Modern Warfare", "Super Mario Galaxy", "WWE SmackDown vs. Raw 2008" and "Tom Clancy's Rainbow Six: Vegas 2". Kids and teenagers are watching TV shows such as "One Tree Hill", "Everybody Hates Chris", "The Hills" and "WordGirl". If you're a kid or a teenager, then you're probably playing with toys such as the Xbox 360, the PlayStation 3, iPod Touch and WALL-E toys.

If you are looking for some childhood nostalgia, then check out November 4th, 2014 instead.

George W. Bush Jnr. was the President of the United States on November 4th, 2008.

Gordon Brown was the Prime Minister of the United Kingdom on November 4th, 2008.

Enter your date of birth below to find out how old you were on November 4th, 2008.

Here are some fun statistics about November 4th, 2008.

Have something to say about November 4th, 2008?