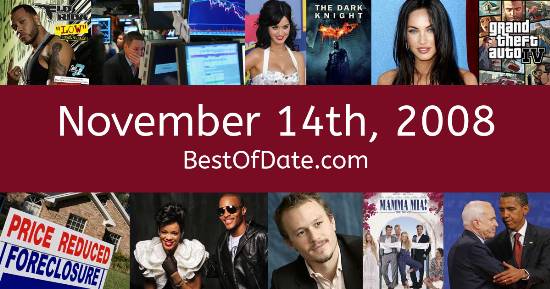 Songs that were on top of the music singles charts in the USA and the United Kingdom on November 14th, 2008.

The date is November 14th, 2008 and it's a Friday. Anyone born today will have the star sign Scorpio. Currently, people have "that Friday feeling" and are looking forward to the weekend.

George W. Bush Jnr. is currently the President of the United States and the movie Quantum of Solace is at the top of the Box Office. In the United Kingdom, Gordon Brown is the current Prime Minister. Practically every teenager and adult has a MySpace or a Bebo account.

If you're a kid or a teenager, then you're probably playing with toys such as the Xbox 360, the PlayStation 3, iPod Touch and WALL-E toys.

If you are looking for some childhood nostalgia, then check out November 14th, 2014 instead.

George W. Bush Jnr. was the President of the United States on November 14th, 2008.

Gordon Brown was the Prime Minister of the United Kingdom on November 14th, 2008.

Enter your date of birth below to find out how old you were on November 14th, 2008.

Here are some fun statistics about November 14th, 2008.