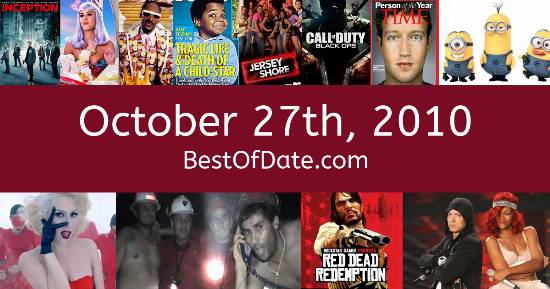 Songs that were on top of the music singles charts in the USA and the United Kingdom on October 27th, 2010.

The date is October 27th, 2010 and it's a Wednesday. Anyone born today will have the star sign Scorpio. The summer is long gone. Temperatures have started to become much cooler and the evenings are beginning to get darker.

Fallen leaves have carpeted driveways, lawns, pathways and sidewalks and there's a fresh earthy scent in the ear. Halloween of 2010 is just days away. People are watching horror movies and thinking about which costume they are going to wear. Others are organizing parties. The song Just The Way You Are by Bruno Mars is on top of the singles charts in both the USA and the United Kingdom.

Barack Obama is currently the President of the United States and the movie Paranormal Activity 2 is at the top of the Box Office. In the United Kingdom, David Cameron is the current Prime Minister. The term "hipster" is currently growing in use. The word is being used to describe people who are pretentious and deliberately anti-mainstream.

A new photo-sharing app called Instagram has just been released. In celebrity news, pop star Katy Perry and Russell Brand have just been married in India. Pop star Taylor Swift has released her album "Speak Now". The album contains songs such as "Mine", "Back to December" and "Mean".

Rob Ford has defeated George Smitherman and Joe Pantalone to become the new mayor of Toronto. Actor Charlie Sheen is in the news once again following revelations that he was forcibly removed from his suite at the Plaza Hotel by police after he caused thousands of dollars worth of damage. If you were to travel back to this day, notable figures such as Denise Borino-Quinn, Pete Postlethwaite, Nate Dogg and Elizabeth Taylor would all be still alive.

On TV, people are watching popular shows such as "Futurama", "Smallville", "Two and a Half Men" and "The Vampire Diaries". Meanwhile, gamers are playing titles such as "Farmville", "Alan Wake", "Civilization V" and "Super Meat Boy". Kids and teenagers are watching TV shows such as "The Fairly OddParents", "The Suite Life on Deck", "Glee" and "Victorious".

Popular toys at the moment include the likes of the Xbox 360, ZhuZhu Pets, the KidiZoom Camera and ZhuZhu Pets.

If you are looking for some childhood nostalgia, then check out October 27th, 2016 instead.

Organized crime boss. Deceased
Born on October 27th, 1940
He was not alive on this date.

Barack Obama was the President of the United States on October 27th, 2010.

David Cameron was the Prime Minister of the United Kingdom on October 27th, 2010.

Enter your date of birth below to find out how old you were on October 27th, 2010.

Here are some fun statistics about October 27th, 2010.