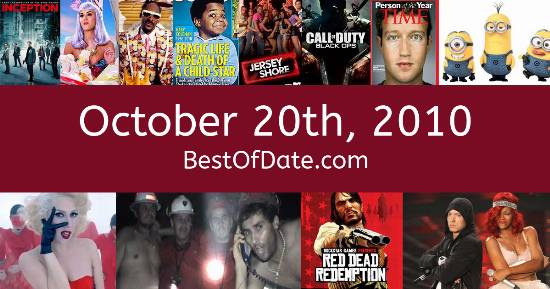 These songs were on top of the music charts in the United States and the United Kingdom on October 20th, 2010.

The top "Box Office" movie on this date was the film "Jackass 3-D".

The date is October 20th, 2010, and it's a Wednesday. Anyone born today will have the star sign Libra. The summer is long gone. Temperatures have started to become much cooler and the evenings are beginning to get darker.

Fallen leaves have carpeted driveways, lawns, pathways and sidewalks and there's a fresh earthy scent in the ear. Halloween of 2010 is quickly approaching and stores are selling costumes and decorations. In America, the song Just The Way You Are by Bruno Mars is on top of the singles charts.

Over in the UK, Forget You by Cee Lo Green is the number one hit song. Barack Obama is currently the President of the United States, and the movie Jackass 3-D is at the top of the Box Office. In the United Kingdom, David Cameron is the current Prime Minister.

Pre-made comics called "Rage Comics" are extremely popular on the Internet at the moment, as people use them to share relatable experiences. A new photo-sharing app called Instagram has just been released. People are breathing a sigh of relief following news that rescuers in Chile have managed to save 33 men who became trapped in a mine at the start of August. The miners had been stuck underground for 69.

Jimmy McMillan, who is running in New York's state gubernatorial election, has risen to fame because of his campaign slogan "The Rent is Too Damn High". If you were to travel back to this day, notable figures such as Denise Borino-Quinn, Leslie Nielsen, Pete Postlethwaite and Nate Dogg would all be still alive. On TV, people are watching popular shows such as "Skins", "The Big Bang Theory", "True Blood" and "Modern Family".

Meanwhile, gamers are playing titles such as "Borderlands", "Alan Wake", "Civilization V" and "Super Meat Boy". Kids and teenagers are watching TV shows such as "Mickey Mouse Clubhouse", "Curious George", "Phineas and Ferb" and "iCarly". If you're a kid or a teenager, then you're probably playing with toys such as the Xbox 360, the PlayStation 3, Iggle Piggle and the iPad.

These are trending news stories and fads that were prevalent at this time. These are topics that would have been in the media on October 20th, 2010.

Check out our personality summary for people who were born on October 20th, 2010.

Television shows that people were watching in October, 2010.

Popular video games that people were playing in October of 2010.

If you are looking for some childhood nostalgia, then you should check out October 20th, 2016 instead.

Barack Obama was the President of the United States on October 20th, 2010.

Enter your date of birth below to find out how old you were on October 20th, 2010.
This information is not transmitted to our server.

Here are some fun statistics about October 20th, 2010.