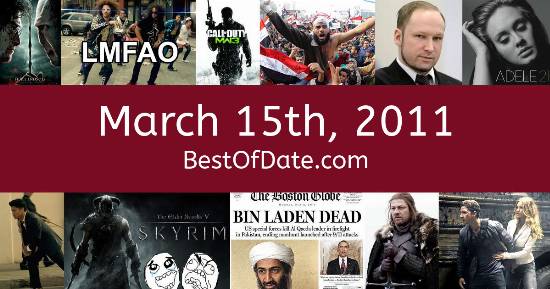 Songs that were on top of the music singles charts in the USA and the United Kingdom on March 15th, 2011.

The date is March 15th, 2011 and it's a Tuesday. Anyone born today will have the star sign Pisces. Spring has started to creep in and the days are beginning to get longer.

St. Patrick's Day is just around the corner. In America, the song Born This Way by Lady Gaga is on top of the singles charts. Over in the UK, Someone Like You by Adele is the number one hit song.

Barack Obama is currently the President of the United States and the movie Battle: Los Angeles is at the top of the Box Office. In the United Kingdom, David Cameron is the current Prime Minister. The term "hipster" is currently growing in use. The word is being used to describe people who are pretentious and deliberately anti-mainstream.

Video rental stores such as Blockbuster are continuing to close their doors at the moment. This is due to the increasing popularity of online streaming services such as Netflix and Hulu. Pre-made comics called "Rage Comics" are extremely popular on the Internet at the moment, as people use them to share relatable experiences. A wave of demonstrations and protests have been taking place across the Middle East, in what has become known as the "Arab Spring".

It's 2011, so the music charts are being dominated by artists such as Adele, Maroon 5, LMFAO, Katy Perry, Rihanna and Bruno Mars. Charlie Sheen is currently causing controversy. The actor, who was recently fired from the TV show "Two and a Half Men", has been attacking his former employers and making strange comments about how he is a "warlock" who has "tiger blood". The catchphrase "Every Day I'm Shufflin'" is being repeated and parodied following the success of LMAO's song "Party Rock Anthem".

A massive 9.0 earthquake has recently occurred off the coast of Japan. The earthquake triggered a powerful tsunami that traveled 10km inland and destroyed over 400,000 buildings. Thousands of people are dead or currently missing. A song called "Friday" by Rebecca Black is currently going viral for all of the wrong reasons. The response to the song is highly negative, with some people calling it the "worst song ever". A civil war is raging on in Libya. Large battles are taking place between Colonel Gaddafi's government forces and Libyan rebels. Currently, it looks as though Gaddafi's regime is close to victory.

A multiplayer FPS game called Homefront has just been released by Kaos Studios. Anti-government protests are currently taking place in cities across Syria. Tributes have been pouring in for rapper Nate Dogg, who recently passed away due to complications of multiple strokes.

On TV, people are watching popular shows such as "Two and a Half Men", "Real Housewives of New York City", "Glee" and "White Collar". Meanwhile, gamers are playing titles such as "Alan Wake", "Civilization V", "Call of Duty: Black Ops" and "Homefront". Kids and teenagers are watching TV shows such as "One Tree Hill", "Peppa Pig", "Wizards of Waverly Place" and "Victorious".

If you're a kid or a teenager, then you're probably playing with toys such as the Xbox 360, the PlayStation 3 and the iPad.

If you are looking for some childhood nostalgia, then check out March 15th, 2017 instead.

Celebrities, historical figures and notable people who were born on the 15th of March.

Barack Obama was the President of the United States on March 15th, 2011.

David Cameron was the Prime Minister of the United Kingdom on March 15th, 2011.

Enter your date of birth below to find out how old you were on March 15th, 2011.