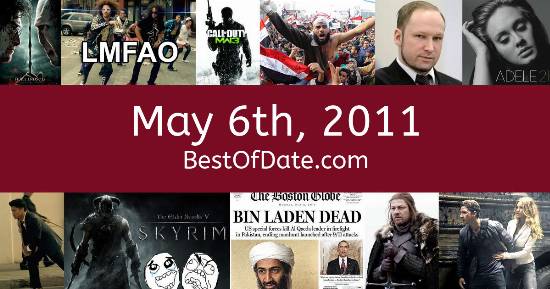 Songs that were on top of the music singles charts in the USA and the United Kingdom on May 6th, 2011.

The date is May 6th, 2011 and it's a Friday. Anyone born today will have the star sign Taurus. Currently, people have "that Friday feeling" and are looking forward to the weekend.

The summer of 2011 has finally arrived. The weather has warmed up and the evenings are brighter than usual. In America, the song S & M by Rihanna is on top of the singles charts. Over in the UK, Party Rock Anthem by LMFAO is the number one hit song.

Barack Obama is currently the President of the United States and the movie Fast Five is at the top of the Box Office. In the United Kingdom, David Cameron is the current Prime Minister. The term "hipster" is currently growing in use. The word is being used to describe people who are pretentious and deliberately anti-mainstream.

The wedding of Prince William and Catherine Middleton has taken place in Westminster Abbey in London. A fad called "planking", which involves a person lying face down in an unusual location, is popular at the moment. The recent killing of Osama Bin Laden in Pakistan is continuing to dominate the news.

If you were to travel back to this day, notable figures such as Randy Savage, Ryan Dunn, Betty Ford and Amy Winehouse would all be still alive. On TV, people are watching popular shows such as "The Office", "Grey's Anatomy", "The Vampire Diaries" and "Community". Meanwhile, gamers are playing titles such as "Red Dead Redemption", "Fallout: New Vegas", "Assassin's Creed: Brotherhood" and "Homefront".

Kids and teenagers are watching TV shows such as "Ben 10", "Mickey Mouse Clubhouse", "Big Time Rush" and "Good Luck Charlie". Popular toys at the moment include the likes of the Xbox 360, the PlayStation 3, ZhuZhu Pets and the iPad.

Notable events that occurred around May 6th, 2011.

If you are looking for some childhood nostalgia, then check out May 6th, 2017 instead.

Historical weather information for May 6th, 2011.

Barack Obama was the President of the United States on May 6th, 2011.

David Cameron was the Prime Minister of the United Kingdom on May 6th, 2011.

Enter your date of birth below to find out how old you were on May 6th, 2011.